TO END CYCLE OF VIOLENCE

'The presidential system of government is bad. It is bad, period' 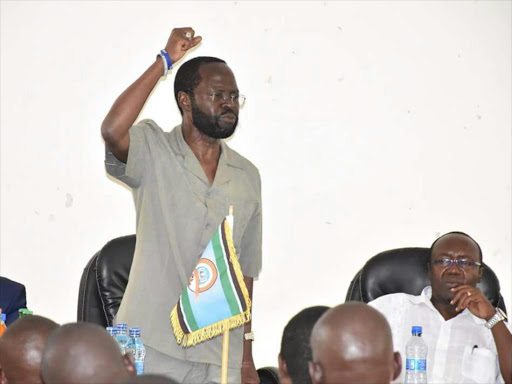 Kenya's presidential system is "an ugly beast" that the country should urgently get rid of, Kisumu Governor Anyang’ Nyong’o has said.

Professor Nyong’o, a towering academic and a close ally of Opposition chief Raila Odinga, has made a passionate case for a parliamentary system which he says is the “the most practical solution to Kenya’s election anxiety”.

In a new book titled Presidential or Parliamentary Democracy in Kenya, Nyong’o argues that a parliamentary system would improve Kenya’s political stability as elections under this model are not a “cut-throat affair”.

He dismisses the presidential system as a promoter of tribal political thinking that thrives on ethnic sentiments, fear-mongering rhetoric and a daredevil determination to remain in power at all costs.

“The presidential system of government is bad. It is bad, period,” Nyong’o writes in the 202 paged-book set to be launched tomorrow at the University of Nairobi.

The event will be graced by Raila and the Young Turks of 90’s among them Mukhisa Kituyi, Paul Muite and Gitobu Imanyara.

“When people like Christopher Msando, a former ICT Manager at the IEBC, can be “eliminated" so that a presidential election can be won, then this presidential system of government is not good for the nation,” Nyong'o says.

The former university don argues that the presidential system has engendered a culture of electoral manipulation in Kenya, leading to dissent and violence every election cycle.

He says there has not been a single presidential election in Kenya’s history where the majority of Kenyans have come out without being politically, morally or physically injured, except in 2002.

As such he argues, the “winner-takes-all” presidential system has not really been fair or good to Kenyans.

“The elections, particularly presidential elections, have been ineptly run, leading to controversial results accompanied by violent state repression of those who question the results.”

He cited the 2007 presidential poll which he says “will go down in history as the worst in terms of mismanagement, loss of life and near-total breakdown in the ability of the government to rule legitimately.”

“The 2017 elections that should have benefited from the democratic procedures enshrined in the Constitution, abused almost every aspect of those procedures, and landed the country into a culture of deep social fissures, a violent political culture and a doubtful future as a united nation,” the governor recalls.

“Some of us who have been involved in the democratic struggle for close to four decades strongly feel that Kenya cannot go on like this into the future. As I have argued, only insects and animals keep on doing the same thing every day.”

Nyong’o says some Kenyan elites whom he describes as “comprador bourgeoisie” long decided that they would always be in charge of state power in Kenya, whether legitimately or illegitimately.

"The tight-knit Kikuyu comprador bourgeoisie, born out of the first Kenyatta regime and nurtured through subsequent regimes, decided, in their own world view, that they would always be in charge of state power in Kenya, whether legitimately or illegitimately, hence their love for authoritarian presidential systems of government.”

“For them, elections did not really matter; what mattered was the end result that must always see them in power. State power is therefore meant to be used at the behest of these compradors and nobody else unless, after ignoring own self-pride and accepting to be “under dogged” as a powerless ally, they begin to enjoy the smell of power while real power was feasted upon exclusively by the compradors.”

Nyongo says “other communities in Kenya felt despised and “under dogged” by the compradors.

“That is the perfect reality of internal colonialism in Kenya and it is unacceptable. Another Kenya is possible after renegotiating the right of all Kenyan nationalities to self-determination, up to and including secession,” he writes.