They were arraigned before Shanzu Senior Principal Magistrate Florence Macharia.

• They will be detained in Nyali Police Station until Tuesday next week when the court will rule whether they will be released on bond or not. 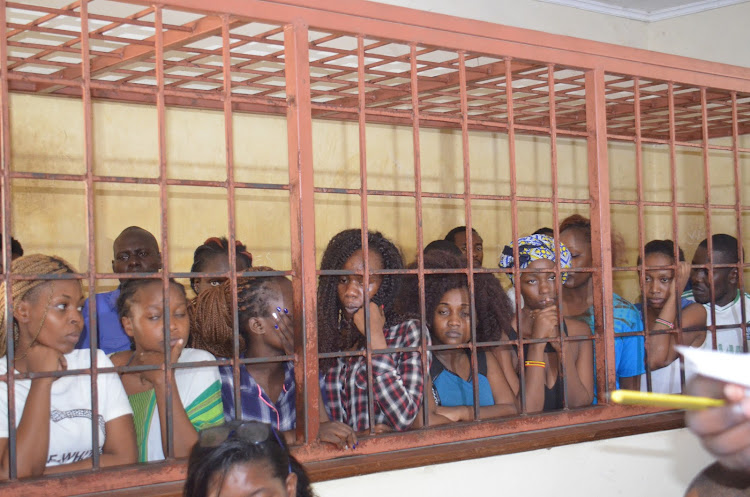 Some 10 women and one man were arrested while shooting pornographic films at posh estate on Nyali, Mombasa, on Thursday night.

The raid at Simba Estate, a private apartment, was carried by officers from Nyali Police Station and Kenya Film and Classification Board officials.

Yesterday, the 11 were arraigned at Shanzu Law Courts and charged with trafficking obscene publications.

Onyango is said to be the team leader of the 10 women aged between 20-40 years.

They were arraigned before Shanzu Senior Principal Magistrate Florence Macharia.

However, the police asked for five more days to conclude their investigation, arguing that the suspects might interfere with the investigation if released on bond.

“The suspect might log in into their accounts and erase the crucial evidence. The exhibits recovered also need to be taken to cybercrime unit at the DCI headquarters in Nairobi for analysis,” police argued.

SPM Macharia gave the police up to Tuesday, July 16.

“The suspects should be detained at Nyali Police Station and be brought back to the court on July 16 in the afternoon to proceed with the matter,” she said.

They will be detained in Nyali Police Station until Tuesday next week when the court will rule whether they will be released on bond or not.

Mombasa KFCB boss Bonventure Kiko said the agency has been following on sexual related activities since 2013 when other 11 women were arrested in Nyali shooting pornographic acts with dogs.

Other 12 women from Nepal were arrested in the same estate in clubs on suspicion of sex trade.

"She touched my private parts, It felt like we were playing and took no offence."
News
8 months ago

Internet service providers in Uganda have blocked 27 pornography websites after a directive was issued by the Uganda Communications ...
News
1 year ago
STAR COMMUNITY POLICY AND PARTICIPATION GUIDELINES
by ANDREW KASUKU
News
13 July 2019 - 06:00