•Seafarers complain of being neglected in job opportunities 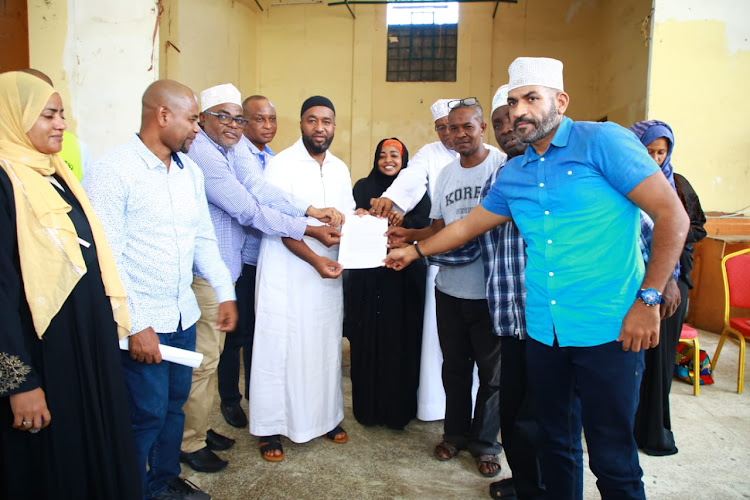 Mombasa Governor Hassan Joho has asked the government to involve residents in harnessing Coast resources for the blue economy.

Joho said the state is likely to face resistance if it does not engage residents and local leaders.

Flanked by six MPs and two senators from the region, Joho warned the government against "taking Coast counties for granted to exploit the blue economy".

“The blue economy should not be a platform for other people to enrich themselves,” Joho said.

He spoke on Monday at Tononoka Hall where the leaders met seafarers who complained of being neglected by the government in job opportunities.

The Coast leaders dismissed claims they are opposed to the blue economy but expressed concern the government is not sincere.

“Nobody has talked to us. You need to engage us,” the governor said.

Leading the seafarers, Hassan Boflo said the government has been playing games with their lives, allowing ships into the country to exploit their resources without employing them.

“Some fishing vessels come into our waters to catch fish and pay us Sh10,000 a year yet we catch up to 40 tonnes of fish,” Boflo said.

Mvita MP Abdulswamad Nassir said the government must respect the Coast leadership and its people.

“No one opposes the blue economy. But why should the second container terminal be dished out to foreign entities through the backdoor? How stupid do you think we are?” Nassir asked.

"It is foolhardy for one to willingly accept medication from the same person who inflicted the wound on you in the first place", he said.

Kisauni MP Ali Mbogo said they will not allow the privatisation of the port.

He said the government should not use the blue economy to confuse residents into submitting to their only major natural resource to be sold off.

The first-time MP said they have been threatened by some senior government officials for speaking out against the privatisation of the port.

Sad as it is, he said, the government is trying to use the divide-and-rule tactic to get their way.

“Those that are being used to push for this privatisation are our very own people,” he said.

This was the claim made by Lunga Lunga MP Khatib Mwashetani last month.

The MP said a legislator from the Coast is being used by the government to create confusion among residents to give up the port.

On Monday however, Mbogo said there is no link between the Blue Economy and the port privatisation plans.

The government has introduced amendments to the Merchant Shipping Act that allow the CS to suspend any part of the law.

Critics argue that this is a ploy to enable the Kenya National Shipping Line to run the second container terminal (CT2).

The majority shareholder of the KNSL is Mediterranean Shipping Company, owned by an Italian family.

The government argues that the move will create 10,000 jobs for Kenyans, an argument disputed by the legislators from the Coast.

“Give them an inch and they will take a yard,” Mbogo said referring to the planned move to hand the CT2 to KNSL.

President Uhuru Kenyatta has called on the G7 nations to support the protection of oceans and seas by partnering with Kenya in hosting the first ...
News
3 years ago

Kenya has turned its focus to the exploitation of the blue economy with the creation of a state department on shipping and maritime affairs.Defence ...
News
3 years ago
by BRIAN OTIENO Correspondent, Coast Region
News
21 May 2019 - 00:00