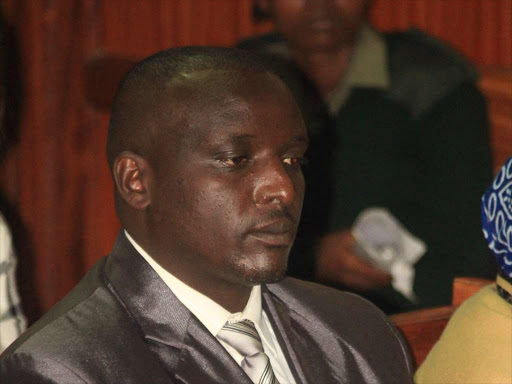 The family of the innocent miraa trader murdered in

2013 by a police OCS in Ruaraka are praying that he spends the rest of his life in prison.

Nahashon Mutua was convicted in December last year of the torture-slaying in a police cell of Martin Koome, 33. Sentencing is set for Tuesday next week.

former police boss to have the weight to serve as a lesson" to rogue police officers. The man sought anonymity, citing fears for his own life.

The International Justice Mission, the human rights lobby whose meticulous investigations helped the prosecution and Ipoa, said the judge should sentence according to the law. Death sentences have not been carried out in Kenya

Mutua went to great lengths to cover up the killing, the IJM report shows.

May 2014, IJM filed a complaint with the Independent Policing Oversight Authority about Mutua's near-successful bid to frame Kevin Odhiambo, one of Koome's cellmates.

He had returned to his Baba Dogo home drunk. A furious argument erupted with his wife, Peninah Kaumbutho.

Koome grabbed his two-month-old baby and threatened to jump out a window and kill himself and his child.

His wife raised the alarm and called for help from neighbours. They poured into the house and some called the police.

The police officer who responded arrested Koome and insisted on taking him to the police station, despite his wife's pleas that it was only a domestic argument and they only needed to calm Koome down.

"We must go with him, we will hear about it at the station," the officer told her as they left with Koome.

At the station, Koome refused to get into the cell, saying he had not committed any crime and only argued with his wife.

Junior officers sought intervention from OCS Mutua. Then the torture and beatings began.

"At about 11pm the same day, Mutua took Koome out to the yard and thoroughly assaulted him with a ridged steel pipe," the court record shows.

followed her husband to the station that night, with the baby on her back.

She was breastfeeding at the desk when she heard her husband tell the police to stop beating him. "I then heard a commotion and the beating lasted about three minutes," she said.

The following morning, she and her sister-in-law Ann Manyara went back to the station, but they were told Koome had been taken to Kenyatta National Hospital.

then went to KNH.

"At the Hospital they found him on a stretcher, his face swollen and he had wounds and deep cuts. He could not speak. He died at 8.30pm on December 20, 2013," the records indicate.

recalled how Mutua shoved Koome's head into a large barrel filled with water, to simulate drowning. All the while he beat him, they said.

Further, IJM records show that a protected witness testified that he was arrested over allegations of robbery and put in the cells at around 10.30pm.

"While in the cells he heard a voice say, “Mtu ana rape mtoto wake (Someone rapes his child"). He said the person said to have raped the child was ordered to enter into a drum (barrel)," the testimony said.

The witness could hear bubbling sounds as though somebody was drowning.

"He heard sounds of a man being beaten. He said there was also another man in the cell who told him that he had also been beaten by the police. Minutes later another man who was injured was brought into the cells by two officers. He was wet and bloody," it says.

Another protected witness corroborated the accounts of the first witness, saying that he saw someone being taken to the cell where he was and also saw Mutua holding a metal pipe.

"Five minutes later he saw the accused person beating someone. There was a bulb lighting the place outside the cell so he could see through an opening in the cell. The man was put in the cell, his clothes were wet and he was bleeding. He was in a bad shape," the testimony continues. The suspect had fallen unconscious and was rushed to KNH.

At his trial, Mutua dismissed the statements as "mere speculation and suspicion" that could not pass for evidence.

But the judge ruled that the police boss had murdered Koome.