Ray of hope as courts jail 10 cops over extrajudicial killings 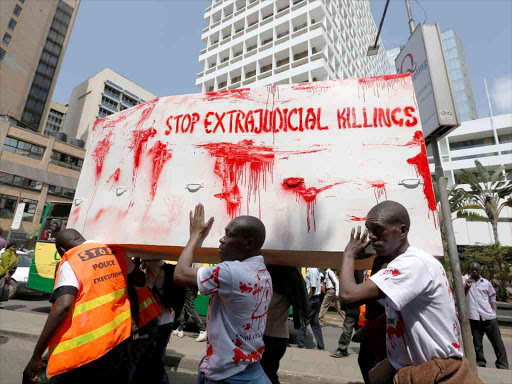 Members of the civil society carry a coffin stained with mock blood as they chant slogans during a protest in Nairobi dubbed 'Stop extrajudicial killings', on the killing of human rights lawyer Willie Kimani, his client and their driver, July 4, 2016. /REUTERS

At least 10 police officers were convicted of either murder or manslaughter in 2018, sending a warning of no more room for perpetrators of extrajudicial killings.

The latest to be convicted was former Ruaraka OCS Nahashon Mutua who a man arrested for fighting with his wife.

Judge Stella Mutuku on December 13 held that there was sufficient evidence to prove that the officer killed Martin Koome in a police cell.

Mutua's is just but one case which mirrors the extent to which police excesses have led to the loss of lives and disappearances of persons.

On November 28, Justice Weldon Korir sentenced Salim Mohamed, a police officer who caused a boda-boda accident in Lamu that led to the death of a passenger, to 12 years in jail.

The cop was found guilty of manslaughter for causing the death of Margaret Njeri in 2015.

Two weeks before that, two police officers Benjamin Kahindi and Stanley Okoti were sentenced to death for the murder of three people in Kabete.

The two, formerly of Kabete Police Station, were handed the sentence for killing Constable Joseph Obongo, and his two cousins Geoffrey Mogoi and Amos Okenye on October 7, 2014.

On March 20, Administration Police officers Peter Musau Maweu, Jonathan Nzivo John Nabea, Bernard Engolet, and Sammy Mwova were imprisoned over the killing of a reveller during a crackdown in Umau village, Embu county.

The two senior police officers were found guilty of manslaughter and convicted, alongside their three recruits, for killing Danson Wachira for drinking outside Mututho hours.

Judge Florence Muchemi, in her ruling, said the prosecution did not prove murder, hence, jailed them 10 years.

Wachira, a miraa farmer, was struck on the head during a raid by the five officers on January 11, 2014.

Several other cases are still lined up in court even as human rights agencies warn that the situation is yet to improve.

Key among them is of four police officers charged with the murder of IJM lawyer Willie Kimani, his client Josephat Mwenda, and their taxi driver Joseph Mururi.

IPOA and human rights agencies are also pursuing a case where an anti-stock theft officer Evans Wiyema is accused of killing a fisherman in Naivasha.

The matter, before Justice Richard Mwongo at the Naivasha law court, was adjourned to March next year after police failed to produce the killer weapon.

On July 30, the High Court ordered Kehancha OCS Kipsaina Serem charged with the murder of a suspect.

Justice Anthony Mrima found the officer guilty of contempt of court having failed to produce Daniel Baru, dead or alive, as ordered.

The suspect went missing from the police after his arrest on January 12, 2017, on charges of robbery.

Attempts by his wife Rebecca Baru to access him have never yielded any fruits.

A police officer Edwin Moi is also facing charges for killing William Mwangi in a fight over beer. The case is pending at the Kiambu High court.

Ahmed Ali Noor is also at the said court for shooting dead one Arthur Gathagu. One Jamal Hussein is also in court for assaulting Eberst Nyamoti in Kasarani in 2013. The latter lost his testicles following the incident.

Missing Voices, a website that details extrajudicial killings, says that since 1995 to date, 438 people have been killed or disappeared in the hands of the police.

The site reports that 1,732 cases are yet to be verified. The Independent Medico-Legal Unit said 822 people were killed or disappeared by police as at June 2018.

Following this, the International Justice Mission (IJM) alongside a group of mothers and widows of 22 young men killed by police went to court.

They want the Attorney General to advice the President Uhuru Kenyatta to establish a commission of inquiry into the deaths.

Director of Criminal Investigations George Kinoti said any officer found culpable in acts of human rights abuses or such killings will be punished.

"Any officer who subverts the law will be punished. We are cooperating with human rights agencies to deal with existing cases."

IPOA, Independent Medico-Legal Unit, Kenyan National Commission on Human Rights, rights agencies such as Muslim for Human Rights (Muhuri), IJM, Police Reforms Working Group, and the Mathare and Dandora Justice Centre have been at the forefront in ending police abuses.