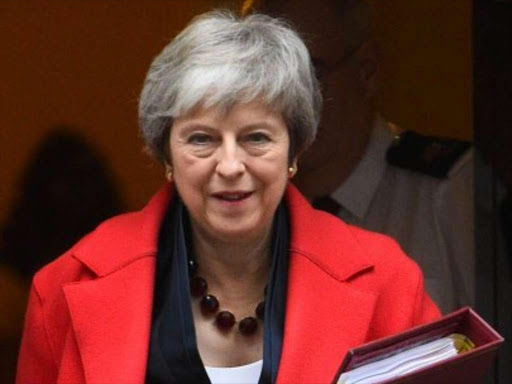 Ministers will again battle to win over MPs to Theresa May's Brexit deal later, a day after the government suffered three defeats on key votes.

Security will be the focus of the second of five days of debate in the Commons, where

extended into the early hours.

Crucially, MPs backed calls to give them a direct say in what happens if Mrs May's deal is rejected next week.

A former Tory chief whip has told the BBC he expects the PM to lose the vote.

Mark Harper, who backed Remain in the referendum, said he would vote against the withdrawal agreement, and predicted the deal would be rejected by 80 of his party colleagues.

The deal has been endorsed by EU leaders but must also be backed by the UK Parliament if it is to come into force. MPs will decide whether to reject or accept it next Tuesday, 11 December.

However, Harper urged the prime minister to renegotiate the deal, insisting the current plan would leave the UK worse off.

Ministers will plough on with attempts to win over MPs on Wednesday, with eight hours of debate on the security and immigration aspects of the withdrawal agreement.

Meanwhile, May is expected to continue trying to convince small groups of her MPs to back the plan in private meetings.

"I promise you today that this is the very best deal for the British people and I ask you to back it in the best interest of our constituents and our country," she told the Commons on Tuesday.

The PM spoke after a torrid afternoon which saw her government ruled in contempt of Parliament for failing to comply with a binding vote demanding the publication in full of legal advice it had received before agreeing the Brexit deal.

First, the government lost a bid to have the legal advice issue dealt with separately by a committee of MPs.

Then ministers conceded they would have to publish that advice in full, having previously argued this would break convention and was not in the national interest.

Most significantly, the government was defeated over changes to the parliamentary process in the event the Commons voted down May's deal.

Instead of being confined to merely taking note of what the government tells them, MPs would also be able to exert more influence by voting on what they wanted the government to do.

This could potentially see Parliament wrest control of the Brexit process from ministers if, as expected, MPs push for a "Plan B" alternative to Mrs May's deal and seek to prevent any chance of Britain leaving the EU without a deal in place.

Former Attorney General Dominic Grieve, who brought the motion, told Channel 4 News it would "allow the UK time to consider its options", including re-starting negotiations with the EU or giving the public the final say.

Liberal Democrat leader Sir Vince Cable said: "The Commons is now very likely to defeat the government again next week on the Brexit deal, at which point the country must be given a 'People's Vote', and asked to choose between the deal or remaining in the EU."

When she finally kicked off the debate about the deal itself, May insisted the UK would enjoy a "better future" outside the EU.

She said the "honourable compromise" on offer was "not the one-way street" many had portrayed it to be and that the EU had made it clear that the agreement would not be improved on.

"I never said this deal was perfect, it was never going to be. That is the nature of a negotiation," she said.

"We should not let the search for a perfect Brexit prevent a good Brexit."

Labour leader Jeremy Corbyn said it was a bad deal for the UK and that his party would seek a vote of no confidence in the government if it was thrown out by MPs.

"I hope and expect this House will reject that deal," he said.

"At that point, the government has lost the confidence of the House. Either they have to get a better deal from the EU or give way to those who will."

Nigel Dodds, leader of the DUP in Westminster, said the agreement "falls short" of delivering Brexit "as one United Kingdom" and would mean entering "a twilight world where the EU is given unprecedented powers over the UK".

"We would have to rely on the goodwill of others to ever leave this arrangement," he said.

"So... the UK's future as a strong and independent global trading nation standing together is in real and imminent jeopardy - an outcome that doesn't honour the referendum or take back control of our laws, our money and our borders."

Ex-Foreign Secretary Boris Johnson dismissed the deal as a "paint and plaster pseudo-Brexit" and said its supporters would be "turning their backs" on the 17.4 million Leave voters.

"If we try to cheat them now, as I fear we are, they will spot it and will never forgive us," he said.

The leader of the SNP at Westminster, Ian Blackford, said the "cold, hard truth" was that the deal represented "a moment of self-harm in our history".

"It is not too late to turn back," he said. "Fundamentally, there is no option that is going to be better for our economy, jobs, and for our communities than staying in the European Union.

"And it is the height of irresponsibility of any government to bring forward a proposition that is going to make its people poorer."

However, in closing the debate shortly after 01:00 GMT on Wednesday, Brexit Secretary Stephen Barclay argued the deal would bring "real changes which will improve the livelihoods of people up and down the country".

"This deal is a choice between the certainty of continued co-operation or the potentially damaging fracture of no deal, or indeed the instability of a second referendum vote," he said.

"Rejecting this deal would create even more uncertainty at a time when we owe it to our constituents to show clarity and conviction."

The second day of the Brexit debate will focus on security. But MPs are also openly discussing how secure the PM is in No 10.

Theresa May will continue to have discussions with small groups of her parliamentary party behind closed doors,

The hope is that one of her defeats can be used to snatch victory.

Last night, Conservative rebels ensured that Parliament would have a greater say over Brexit if Theresa May's deal falls.

So the PM's allies will make it clear to Brexit-supporting backbenchers that this could lead to a new referendum - or a deal that doesn't end free movement - in the hope that more of them will now back what she has negotiated.

But one minister confided to me that it would still be an uphill battle for Theresa May as what he described as "Brexit purists" could "mess up" her plans.