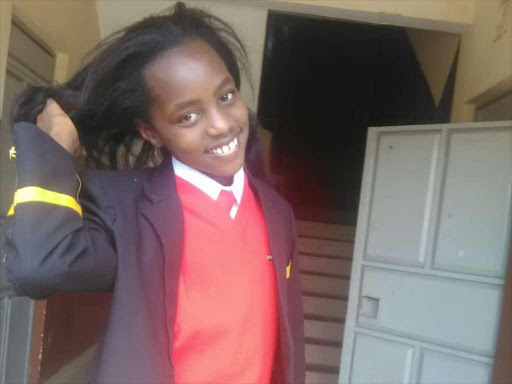 Mitchelle Nchoe of Lizar Academy , who got 414 marks, in the KCPE results.

A Star survey shows six of the top ten performers in the county are girls. Laureen Sanaiyan topped the list with 432 marks. She was followed by Moret Namunyak who scored 429 marks.

Other top performers are Daisy Longonop of St Mary’s Academy and Mitchelle Nchoe of Lizar Academy. They scored 416 and 414 marks respectively.

Narok has the highest number of teenage pregnancies and mothers in Kenya at 40 per cent, statistics by the Kenya Demographic Health Survey shows.

“Girls have proved to be performing even better than boys. It time we spend more energy in ensuring the girl child gets her education rights,” the former Naroosura/Majimoto MCA said.

Kudate praised his daughter saying she has become a role model to other girls due to her good performance. “We hope her results will motivate other girls to work hard,” he said.

Sanaipei attributed her good results to hard work, determination and commitment. “I always put God before anything and that helped me a lot,” she said.