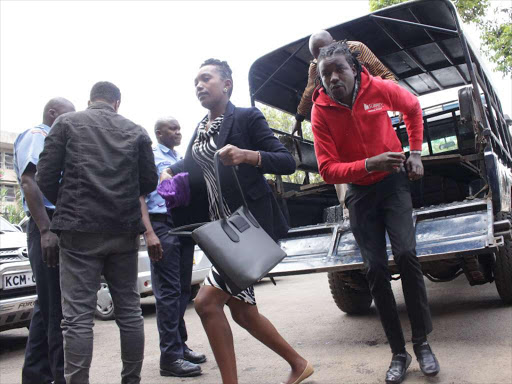 Some of traffic offenders who were arrested in different routes in Nairobi during a crackdown arrive at a Milimani court on November 14, 2018. /COLLINS KWEYU

More than 22,000 traffic offenders have been arrested since the enforcement of Michuki rules began on November 12, officials said.

Sources said the government has collected hundred of thousands of shillings through fines from the offenders.

In Nairobi, most offenders were found not to have fastened their seat belts. Others were pedestrians crossing the road at the wrong places and motorists exceeding the speed limits.

Others were arrested for causing obstruction, driving defective motor vehicles and touting.

The minimum fine imposed was Sh500 for failing to fasten a safety belt with the offenders facing a 30-day jail term. Those driving defective vehicles were fined Sh100,000 or risk imprisonment for three years. The fine depends of the number of defects, sources said.

Some drivers were arrested because their vehicles did not have head lights and inspection stickers.

Both touting and conductors without licence were fined Sh2,000 with a risk of three months in jail.

Judiciary made arrangements including having Kenya Commercial Bank agents inside courtroom and employing more account clerks to ease payment of fines. The culprits also had the option of paying via M-Pesa.

Central regional commissioner Wilson Njega said among those arrested were 3,481 passengers and 451 were boda boda riders. Most boda boda riders were arrested for lacking helmets, licences, insurance and carrying extra passengers. Majority of the Public Service Vehicles impounded were unroadworthy and had invalid inspection certificates.