Court told election must be held 2021 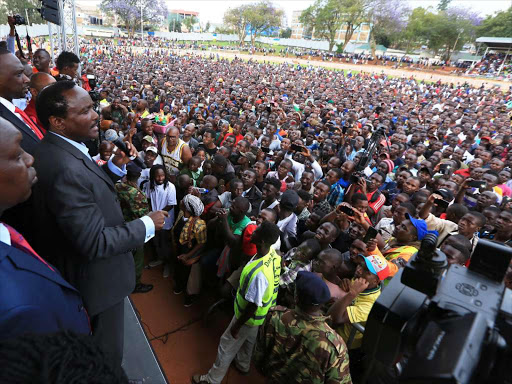 Two activists have filed a constitutional petition seeking to declare that the next General Election should be held in August 2021 and not 2022.

Okiya Omtatah and Wycliffe Gisebe say that holding the elections in 2022 will be unconstitutional as the term of the current elected leaders will have exceed the “fifth” year term limit.

“When five years are added to the year 2017 we get the year 2022. That math is flawed to the extent that it is a computation of the state of affairs after five years and not of in (or within) five years,” the petitioners say.

Five years after the 2017 elections runs from August 8 to August 7, 2022, and elections have to be held within that period. And since the second Tuesday in August 2022 will be in the sixth year after the 2017 general elections, Omtatah argues that the elections must be held the year before.

“Holding the elections on either 9 or 16 August 2022 will allow the parliamentary term to exceed the five-year term limit by two days or nine days,” he says.

Omtatah says IEBC and AG must count the years correctly. “The General Election after 2017 should be on August 17, 2021. If they wait until August 2022, they will have moved into the sixth year and thereby violate article 101 ( 1 ) of the Supreme Law.”

Omtatah says the crystal clear objective of Article 101 ( 1 ) as read together with 102 ( 1 ) of the Constitution of Kenya is to ensure that the term of Parliament does not exceed five years.

Unfortunately, State organs responsible for the elections, politicians and the general population, he says, have misinterpreted Article 101( 1 ) to mean that elections have to be held after every five years, and so anticipate one in August 2022.

Hence, the country must fall back to the second Tuesday in August of the fifth electoral year which falls on August 17, 2021.

“Even if we use raw calendar dates, and count the Tuesdays beginning August 1, 2022, we note that the first Tuesday in August will fall on August 2, 2022, and the second Tuesday will fall on August 9, 2022, which is in the sixth year by two days,” he argues.

The calculations run against the general public belief that the next general elections after 2017 under the 2010 Constitution will be held on August 9, 2022, being the second Tuesday in August after the fifth year.

Omtatah wants the court to declare the date as a precaution against a potential constitutional crisis.

“This state of affairs is likely to cause major upheavals and a constitutional crisis should it dawn on Kenyans at the eleventh hour that the elections should be held in August 2021 and not in August 2022,” he says.

The crisis could also include commitments entered into by elected leaders, including bank loans taken in the belief that the term will expire after five years.