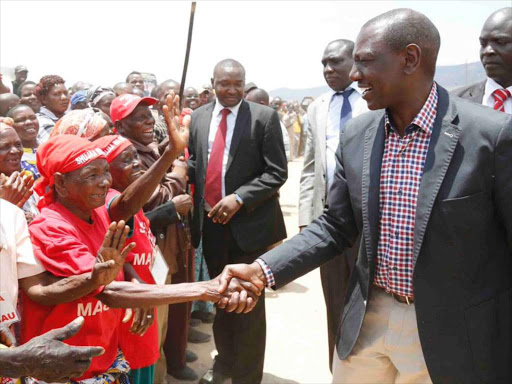 Deputy President William Ruto's allies have advised him against opposing a strong pro-referendum movement too close to the 2022 General Election. /COURTESY

Fear of isolation by major political players supporting a referendum openly or behind the scenes forced Deputy President William Ruto to abandon his hardline opposition to constitutional changes.

The Star has established that for months, Ruto's allies advised him against opposing a strong pro-referendum movement too close to the 2022 general elections.

A post-referendum force would trigger major political realignments, they argued, which would likely pose a major hurdle to his presidential bid should he lose the contest.

Its is widely speculated that Raila will face-off with Ruto in the 2022 presidential duel, which has sent chills to the DP's camp.

While Ruto is already in frenetic countrywide campaigns to succeed Uhuru, Raila has not publicly declared he will take a fifth stab at the presidency despite hints by his close allies.

“The pro-referendum brigade is growing by the day. You cannot risk to face such a group in a referendum too close to an election. The referendum contest will automatically influence 2022 voting lines,” a source close to Ruto told the Star.

Referendum proponents are scheming to amend the Constitution in mid 2020 or early 2021 to give room for the boundaries review as well as re-constitution of the IEBC.

In 2005, the “Orange/NO” side led by Raila used the 2005 plebiscite as a springboard to unseat then President Mwai Kibaki.

The Orange symbol used during the plebiscite was turned into a political vehicle – Orange Democratic Movement – with nearly all “NO” luminaries being part of the anti-Kibaki crusade.

Kibaki survived by a whisker but the country was plunged into chaos that resulted in a power sharing deal brokered by international mediators.

Ruto made the about-turn on Saturday in Tharaka Nithi after months of blistering attacks on the law change proponents whom he branded as “lazy and incompetent”.

The statement was targeted at his political nemesis, Raila, whom he claims is now plotting to kick him out of Jubilee after the March 9 handshake with Uhuru. Ruto last week said that was an impossible feat.

However, in a surprise about-turn over the weekend, Ruto grudgingly declared he had no problem with the referendum.

“We have no problem with the referendum. Our problem is hypocrisy and conmanship, to tell us the referendum was agreed during the handshake, you are lying to us,” he stated in a veiled response to Raila again.

Even as he climbed down from his hardline stance, Ruto warned that his support was conditional as he would still oppose any agenda to expand the executive by introducing a parliamentary system with an executive Prime Minister.

There have been some muted suggestions that Uhuru too should not retire but return in 2022 as Prime Minister. Uhuru pooh poohed a similar suggestion by Makadara MP George Aladwa over the weekend to accommodate him in the next constitutional dispensation, reminding him that there is a constitution.

“Raila Odinga has always wanted to frame Ruto as anti-people. The DP was aware of this. That is why he said as a politician and a citizen he doesn’t want to be a stumbling block if the issues are beneficial to Kenyans,” said the Garissa Township MP.

Duale insisted that the DP has never opposed a referendum but only warned against setting the country into a campaign mode that would derail the implementation of the Jubilee manifesto and the Big Four agenda.

“His only worry has been that this is not the right time. It is only a fool who doesn’t change his mind. The DP is ready for the referendum which doesn’t create more positions. He is also ready for the 2022 elections,” Duale said.

Duale said the parliamentary caucus will carefully examine the bill once drafted with a bias against any attempt to reduce the number of constituencies and counties.

“As pastoralists we will oppose whatever undermines what we have been given under the Bill of Rights,” he told the Star.

However, ODM chairman John Mbadi termed Ruto as “a confused and panicky politician” who appears to be scared of any proposal to neutralise the powers of the President.

"Ruto fears the unknown, he thinks we are targeting a position that he thinks belongs to him in future. That is not the thinking I expect from a politician of the DP’s stature. He is opposing something he doesn’t even know,” said the Suba South MP.

Mbadi challenged Ruto, who unsuccessfully opposed the referendum in 2010, to focus on putting together his views on areas in the Constitution he has reservations on.

“Ruto should not be having difficulties. He should just go into his archives, retrieve them and present the views instead of attacking other people’s proposals. Let him say what he wants included instead of being antagonistic,” Mbadi said.

The ODM chairman said the changes being proposed by leaders are party views which will also be presented in a bipartisan manner at an appropriate time.

“Let people realise that there is the Building Bridges team which was mandated to look at how to unite the country and address historical issues. If the committee comes up with a proposal to amend the constitution or a referendum so be it,” he added.

But Sirisia MP John Waluke defended Ruto’s support for a referendum but denied that the DP had changed his mind.

“To say that the DP opposed the referendum proposals is being petty. There is nowhere the DP has said he will oppose the referendum. That is just perception. What must be made clear is the question before people make up their mind. Ruto said the proponents must come up with the issues,” said Waluke.

West Mugirango MP Vincent Kemosi told the star that the DP was playing politics of survival and just being strategic in his conditional support for a referendum.

“The Deputy President has supported the referendum with conditions that the plebiscite must be about reducing the public wage bill and not creating positions for other people,” said Kemosi, a Ford Kenya MP.

He said Ruto was a tactical leader who wanted to shift the referendum debate from being a personalized agenda around his opposition to a rather robust arena of issues.

“I know the deputy President would also be having issues he would want included but was opposed to a referendum that seeks to create a powerful position for one or two people. We must use the referendum to end the politics of dynasty and not to entrench dictatorship,” Kemosi said.

Bahati MP Onesmus Ngunjiri said Ruto has the interests of Kenyans at heart and would want an all-inclusive referendum with the issues agreed beforehand so that such a plebiscite doesn’t divide Kenyans.

“I remember it was Ruto who opposed this constitution because it would overburden Kenyans. True to his word, Kenyans are carrying a heavy burden of a bloated government. He warned Kenyans about it but we were told to pass the constitution without reading,” said Ngunjiri.

Ngunjiri added that he was happy with the DP’s conditions for a referendum and said the debate should now involve Kenyans from all shades of life.

“We must have the church, civil society and the political class involved in setting the agenda for the referendum. Those who said twenty per cent was bad must bring their issues so that we iron out the supreme law at once,” he added.

Post a comment
WATCH: The latest videos from the Star
by Felix Olick and James Mbaka
News
09 October 2018 - 06:00
Read The E-Paper