Senators not travelling to Japan after all - Lusaka 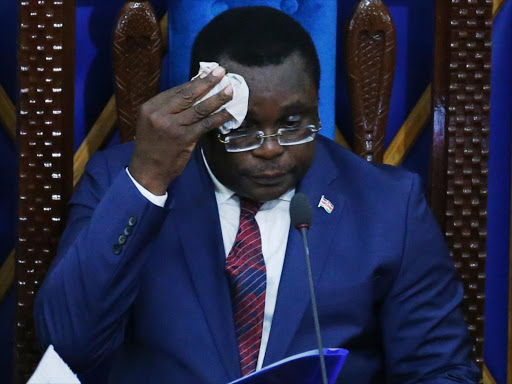 Senate Speaker Ken Lusaka has denied approving the planned trip by a group of senators to Japan.

He acknowledged that some senators had expressed interest in travelling to watch the world volleyball championships where Kenya is participating.

He, however, clarified that he had not approved the trip because there is no money.

A similar request by members of the National Assembly was turned down by Speaker Justin Muturi, citing the austerity measures being implemented by the government.

"Someone is trying to be mischievous and divert attention from the successful outing we have had in Eldoret," Lusaka told the Star on Friday morning.

has been operating from Uasin Gishu county since Tuesday.

It has been hosted by the Uasin Gishu county assembly in Eldoret.

Various committees of the House have been holding meetings and visiting facilities of the counties in the region.

Yesterday, the committee held sessions on the problems afflicting maize farmers in the region. They also visited Bungoma and Nandi counties.

Sources had told the Star that five senators were poised to travel to Japan this weekend to join the national volleyball team which jetted out last week.

Japan is categorised among the most expensive foreign destinations and senators would each earn per diem in excess of Sh100,000 per day for the 14 days.

Members of the national volleyball team were however paid only Sh80,000 each as

for their entire 18-day stay by the Kenya Volleyball Federation.

It was not clear whether the Ministry of Sports would top up their stipends.