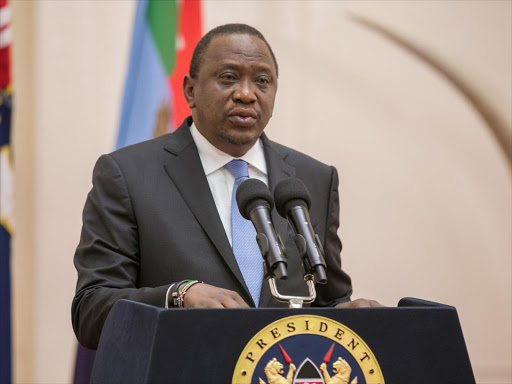 PRESIDENT Uhuru Kenyatta on Friday bowed to public pressure and proposed to have the tax on petroleum products cut by half from the current 16 to eight per cent.

In a move aimed at placating donors while at the same time appeasing the public, Kenyatta said the decision will bring down the price of petrol from Sh127 to Sh118.

But as a trade off, the government will embrace cost-cutting measures and budget cuts to plug the deficit.

With the VAT down to eight per cent, the government will now collect Sh17.5 billon a month down from an earlier projection of Sh35 billion.

“But still we face a financing gap. This measure will not suffice to balance our budget, as required by law,” he said.

He accused MPs of playing to the gallery by sacrificing Kenya's ambitions and instead resorting to bad politics.

The ball is now back with the same MPs who will, through a special sitting scheduled for next week, endorse Kenyatta's proposal or stick to their earlier position and demand the entire 16 per cent be suspended until 2020.

National Treasury CS Henry Rotich will prepare a supplementary budget to be tabled in the National Assembly on Thursday with a raft of Kenyatta's suggestions to redistribute allocations.

MPs had on August 30 unanimously voted to delay, for a further two years, the 16 per cent VAT tax, which had already been postponed twice since 2013.

However, Kenyatta, who has been unusually silent over the debate yesterday explained his position in a live broadcast detailing why he has sent the Bill back to MPs.

“The Finance Bill 2018/19 brought to me yesterday (Thursday) fell short of this threshold. It protected the status quo and sacrificed the bigger vision. It took the easy path, instead of rising to the challenges of our time. It was good politics, but bad leadership,” he said.

MPs have the option of garnering a two-thirds majority or 233 MPs to overturn Uhuru's decision and revert to their earlier proposal to suspend the law, pass the President's proposals as contained in his memorandum or suggest amendments.

Uhuru said the country has no option, but to accept taxation on petroleum products to spur growth.

"Fellow Kenyans, we have a country to transform, and we must make bold decisions to achieve our vision. As President, it is my responsibility to put Kenyans first, those living today, and your children, who will inherit the country tomorrow," he appealed.

This calls for a balance between short term pain and long-term gain.

He said traders must of necessity bring down the price of commodities and services in line with his new proposal.

To rally troops behind his budget cuts and eight per cent VAT proposal, the President and Deputy President William Ruto will on Tuesday morning meet all Jubilee MPs at State House, Nairobi.

"We will have our PG [Parliamentary Group] at State House. We want to speak in one voice and would want to listen to the President," a Jubilee leader told the Star yesterday.

National assembly minority party ODM has also summoned its MPs for a PG on the same day to deliberate on the proposal and take a common position.

In an indication of a split in positions, ODM said it would rally its members to veto Kenyatta.

"As minority leader and ODM chairman we are not going to accept any additional taxation. It is our considered opinion as a party that fuel products are already overtaxed, hence no need for further taxation," said Minority Leader John Mbadi.

He added:“Even the eight per cent proposal is not good for our economy as it will have ripple effects which will trigger rise in prices of essential goods and services. As a coalition, we are going to ask our members to overrule the President on this.”

National Assembly Speaker Justin Muturi has convened a special sitting on Tuesday afternoon and two sittings on Thursday to consider the President's memorandum on the Finance Bill as well as the expected supplementary budget.

The President said Kenyans should not be worried that their taxes will be misused as he has proposed to increase the budget of the Ethics and Anti-Corruption Commission, Director of Public Prosecution and the Judiciary to tighten the noose on corrupt elements.

Reacting to the President, ANC leader Musalia Mudavadi welcomed the concession saying completely removing the tax would have been counterproductive.

"He has heard Kenyans and done one better than Parliament in the reduction of VAT to eight per cent. He even bettered my proposed reduction to either 10 per cent or 12 per cent," he said in a statement.

Gatundu South MP Moses Kuria while welcoming the reduction on VAT said MPs would further make budget cuts over and above what the President has proposed to raise over Sh100 billion.

“We are going to keenly look at the supplementary budget and make more savings. It is important that we do away with non-essential expenditures in favour of development,” he said.

Kitutu Chache South MP Richard Onyonka said while Kenyans continued to be burdened by taxes, the resources end up in a few people’s pockets.

“I disagree with the President on this one with due respect. We don’t need to tax Kenyans any more. We need to do away with big projects that are not making any returns and have no value to Kenyans,” said the MP who sits in the budget committee.

Onyonka said the President is being hypocritical in his proposal to reduce the tax from 16 per cent to just eight per cent without declaring how he will tackle corruption.

“The problem with our country is not that we are not collecting revenue, the problem is that we are misappropriating resources,” he said.

ODM treasurer Timothy Bosire said MPs must explore alternatives of raising revenue without impacting negatively on the livelihoods of Kenyans.

“This was a reasonable reduction in VAT. MPs should scrutinise the supplementary budget properly to cushion Kenyans from high cost of living,” said Bosire.

“We shall continue to reject this proposal in the house until it comes down to zero. We are not beholden to International Monetary Funds fiscal proposals, or any other Bretton Woods institution.”

Nominated senator Rose Nyamunga said Kenyans are already overburdened and that on Tuesday MPs should vote with their conscience.