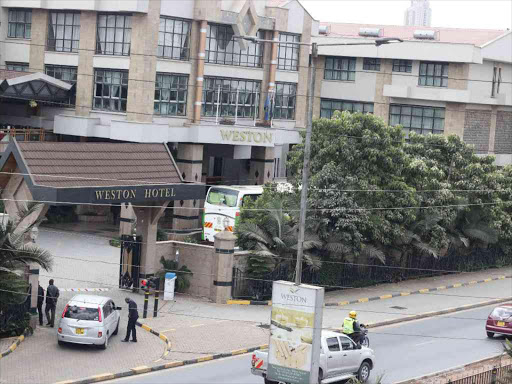 David Ndii has asked President Uhuru Kenyatta to reclaim Weston Hotel in the fight against corruption.

Following the government's demolition of buildings including Southend Mall and Ukay Centre, members of the public have been putting other structures on the spot and demanding action by relevant authorities.

Ndii posted a photo of the hotel owned by Deputy President William Ruto on Twitter on Monday and wrote: "[Uhuru],

this is public land. One more friend you need to lose. And once you are done with him, turn yourself in."

He tagged the DP in the tweet on the hotel that is located in Lang'ata, Nairobi.

The DP admitted during an interview on Citizen TV that he is a shareholder in the hotel, which is opposite Wilson Airport.

Weston sits on public land and the transfer of the plot was done against the advice of senior government officials.

According to court and confidential government documents in possession of the Star, various companies were used to acquire the land.

According to the Survey Plan Folio Number 198 and Register Number 169, registered on January 31, 1990, the land was public land allocated to the Directorate of Civil Aviation.

he has lost lots of friends amid the fight against impunity.

"I have been receiving many calls that, you know ... 'how can you just watch this destruction go on? You must stop it'. I say to them 'it's difficult to stop not because we love to destroy but we must fight impunity," he said.