Dorm goes up in flames at Ambira High School in Siaya 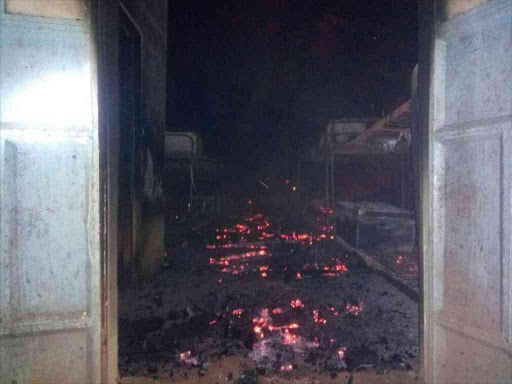 aftermath of a burned dormitory/file

A fire razed a dormitory at Ambira High School in Siaya County on Thursday night, leaving students without places to sleep.

It started at about 8 pm as the students attended preps so there were no casualties.

Siaya county fire fighters tried in vain to put out the fire.

Its cause was not established immediately but police launched investigations.

The aftermath of a fire at Ambira High School in Siaya County, July 5, 2018. /LAMECK BARAZA

In a statement to newsrooms, Ugunja MP Opiyo Wandayi said the incident was highly regrettable.

"It's a big setback to parents, students and the entire Ugunja community, coming at a time when preparations for KCSE are at advanced stage," Wandayi said.

He appealed for calm and asked police to carry out thorough investigations and punish the culprits, should it turn out to be a case of arson.

Three schools in the county have been closed for various reasons. They are Ng’iya Girls', Maranda Boys' and Maliera Boys'.

Maliera was closed indefinitely earlier on Thursday after students went on strike in a demand for a bus and weekly entertainment.