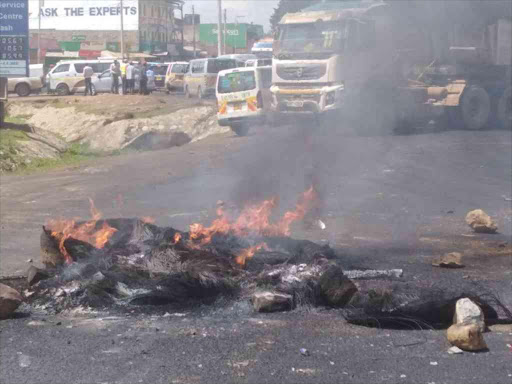 A file lit by protesters following the killing of a man at Burnt Forest in Uasin Gishu County, June 30, 2018. /MATHEWS NDANYI

A man was shot dead at Burnt Forest in Uasin Gishu County on Friday night during confrontations between police and protesters.

two police officers arrested a resident on claims that he had been selling drugs and bang.

Demonstrators gathered as they took the suspect to a police station. They claimed the man only sold sweets.

“It became difficult for the officers to take the suspect into custody so they called for reinforcement from the OCS. As the OCS was arriving, youths threw stones at him forcing him to fire in the air,"

Omanga said they had not established the source of the bullet that led to the man's death.

“We have handed the matter to the DCI,” he said. "A full report will be given soon."

A crowd blocked Eldoret-Nairobi road in the morning, noting justice must be served.

The highway was reopened after senior police officers led by Omanga intervened.

"I urge residents not to disrupt

activities such as transport on the highway because the matter is under proper investigations," the OCPD said.

Post a comment
WATCH: The latest videos from the Star
by MATHEWS NDANYI @ndanyi_mathews
News
30 June 2018 - 12:00
Read The E-Paper