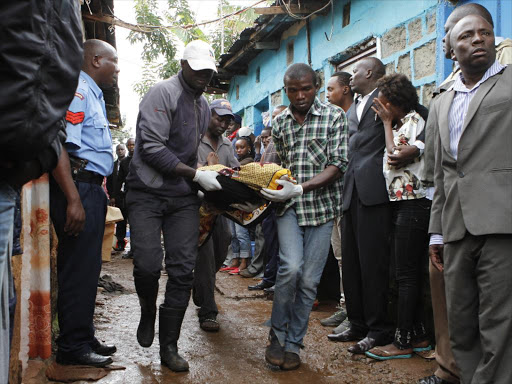 Bodies of the strangled family at Marurui, Nairobi being ferried to the police vehicle from the house yesterday. Photo/VICTOR IMBOTO

A woman and her three children were murdered on Sunday night in Marurui village, Roysambu, Nairobi.

In the latest case of domestic horror, Ann Gathoni, 35, and her children aged between six and 14 were strangled.

The prime suspect is the woman’s lover, only identified as Maina. He is said to have spared his two-year-old son.

The couple is said to have quarrelled frequently but the motive for the murders was not known. Police said there were probably several killers.

The eldest daughter escaped death because she had returned to college on Sunday afternoon.

Maina is said to have abandoned his family several years ago to live with Gathoni.

Kasarani police boss Robinson Mboloi said a search is underway for the killers.

“He spared a two-year-old child. We are following him [Maina] as the main suspect,” Mboloi said.

One of the slain children, a 14-year-old girl, was to sit her KCPE exam this year. Her hands were tied behind her back, indicating she might have struggled with her killers.

“We believe she must have put up a strong fight, so the assailants subdued her,” a detective told the Star in confidence.

Shocked neighbours said they did not hear any commotion. They did not know about the killings until a teacher went looking for the KCPE candidate when she failed to report to school.

“I met her classmates outside the school after they were forced to go back and finish homework. I asked where she was and they said she had not reported to school,” teacher Miriam Nyawira said.

The teacher said she went to the home and called the girl’s name four times but nobody answered.

“I called their neighbour to find out why they were not responding. A neighbour entered the house and came out shouting she was dead,” Nyawira said.

The father of the three slain children, only identified as Mbaria, was at the scene but too traumatised to speak.

A neighbour only identified as Mama Njambi said, “Yesterday night I heard them quarrelling, but I thought it was just a normal quarrel between couples.”

She said the couple had quarreled often.

Another neighbour Mama Shem said, “I was doing laundry outside my house when I heard that Mama Mary and her children had been killed. I immediately went to check and found them dead.”

Most of the neighbours described Gathoni as a hardworking and loving mother.

“She was a responsible mother and has been taking care of her children ever since their father died,” neighbour Peter Murage said.

Gathoni’s cousin said Maina had said several times said he would kill her aunt but she never thought he would do it.

Mary Wanjiku, Gathoni’s niece, said she does not understand why her aunt was killed.

“I was with my aunt [Gathoni] yesterday and all was fine. The man was not married to my aunt but they have a son,” she said.

“We want the government to take action and bring the perpetrators to book,” Wanjiku said.

Roysambu ward representative Peter Warutere said, “This is the first murder we have had in Marurui. This area is known to be crime-free and peaceful.”

He promised to follow up and ensure the perpetrators are arrested.

Last month, a Nairobi man allegedly stabbed and bludgeoned his wife and two-year-old child to death in his office.

Forty-year-old Titus Masika is said to have invited his wife for tea and mandazi. He reportedly wanted to sort their marital problems.

Dagoretti police chief Rashid Mohammed told the Star they found the mother and child in a pool of blood in a bathroom in the Ngong Road office.

Investigators said they believe Masika first drowned the child in a bathtub, then battered his head with a hammer.

The woman had head injuries and several stab wounds to the neck and stomach.

Police did not believe Masika’s account that thugs had broken in and killed mother and child.