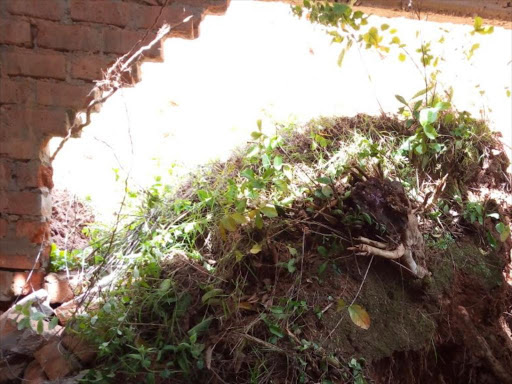 One of the houses in Makueni county that was destroyed by floods on Monday night. /MUTUA KAMETI

Thirty families were left homeless following a landslide in Makueni county on Tuesday.

rubbished reports that some of the victims were buried alive.

"Houses were damaged in different locations but there were no casualties. Roads are impassable," Bitok told the Star.

He said the government advised residents to relocate to higher and safer places.

to help with evacuations amid rescue operations.

A chopper believed to have been dispatched from Nairobi for evacuations landed briefly in Wote town.

The waters swept through the village submerging a number of houses following a heavy downpour.

Sources said villagers climbed trees from where they made phone calls for help.

One told the Star that

he could not trace his family members who stay in the affected village.

"We attempted to rescue them but we were unable

the village. We appeal for immediate help for our neighbours."

In Nunguni village, Kilungu sub-county, 37 homes have been affected by mudslides that left three people with injuries.

"The mudslides toppled trees, demolished some houses and covered roads with a thick layer of mud, rendering

He said one man was taken to Makueni Level 4 Hospital with a broken leg after his house was party damaged by mud.

Two women were taken to the facility after getting injured as toilets sank.

woman and her daughter died after a dam overflowed with floodwaters.