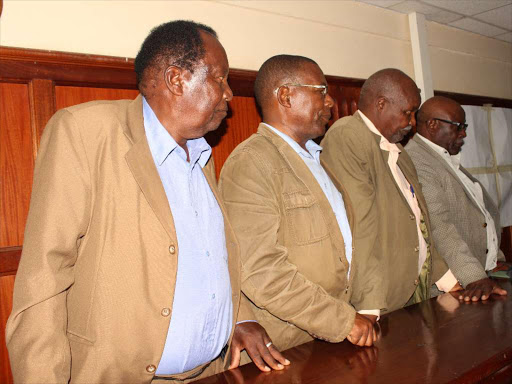 PHOTO STRORY:Former Directors of Malili ranch from left to right Julius Mbau,Leonard Kitua,James Kituku and David Ndolo at the Milimani law court on Friday,March 31 where they were charged afresh for conspiring to defraud the firm of Shs 1 Billion.They were released on a cash bail of Shs 1.5 Million each.PHOTO/COLLINS KWEYU

The hearing of a case in which four former directors of Malili Ranch are charged with stealing Sh553 million will resume on April 24.

They have denied six counts of conspiracy to defraud and steal from shareholders of the land-buying company.

The suspects are accused of fraudulently acquiring the 5,000 acres of Malili Ranch for the construction of Konza Techno City at Makueni county at a cost of Sh1.5 billion. They allegedly committed the offence between February 2, 2009,

The second charge concerns the theft of Sh553,831,731.15, being proceeds from the sale of the acreage to the government.

Mung'asia was the chairman of the ministerial

tender committee which considered the purchase of land for proposed ICT Park in Kitengela area.

He said the committee considered the agenda and went through documents before awarding tender No.MIC 2/2009 to Eric Mutua & Company Advocates on behalf of Malili Ranch.