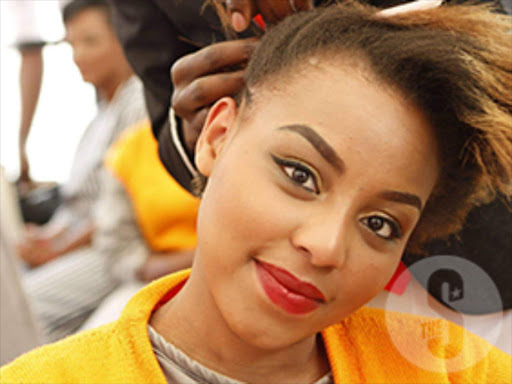 Ruth Kamande - on trial for murdering her boyfriend - yesterday confessed to stabbing him 22 times using a kitchen knife.

Kamande, 24, told the court Mohammed tried to kill her after she discovered he was HIV-positive.

“Farid told me that he would rather kill me and himself than have his status exposed. l stabbed him severally using a kitchen knife, which fell on my chest from his hands after I overpowered him after putting my two thumbs in his eyes to save my life,” Kamande said.

She said she had a long argument with Mohammed that morning after she discovered a card for HIV treatment with his name under a mattress.

“Your honour, it pained me to know that the person who l loved and trusted so much was to ruin my life by infecting me with HIV and Aids,” Kamande said.

She gave a detailed account of her final moments with her boyfriend and said he wanted to kill her after she threatened to reveal his status to his family.

Kamande said Mohammed snatched the treatment card from her and attacked her from behind as she packed her clothes inthe bedroom.

She said investigating officers who rushed her to Metropolitan Hospital and later KNH, where she was given post-exposure prophylaxis to prevent HIV infection - saved her.

Kamande said the night before the murder, Mohammed insisted on having sex with her without protection. She admitted to arguing with Mohammed over love letters she found in his bedside locker.

Kamande said she stabbed Mohammed out of fear, “but tried to save him”.

She denied stabbing herself to cover up.

said they had fits of rage a day before the incident and that the late boyfriend admitted that he had a love affair with the two ladies namely Scholar and Esther who he had abandoned before engaging her.

"After demanding an explanation over the two love letters I found in his bedroom he became angry took the two letters and tore them into pieces trying to make me believe that the two letters meant nothing to him," said Kamande.

The court heard that among the exhibits retrieved at the murder scene was love letters sent to the deceased from one of his girlfriends in the US, a damaged mobile phone handset and the murder weapon.

The accused said that the two were to spend the day at the home of the deceased's uncle, a Mr Edward, who they loved so much before the grisly incident.

Kamande said that she stabbed him since she was in a state of fear, panic and shock to save her life.

She said that after stabbing him severally which she said she can't remember how many times she rushed to the kitchen to get some water to save his life after she realised that Farid was bleeding heavily.

The accused told the court that she had a lot of blood splattered all over her clothes before the police and neighbours came on hearing a commotion and distress screams from their house.

The accused said that during the struggle with the deceased, he inflicted her with several injuries on her chest, stomach, fingers, hands, right thigh and abdomen before she overpowered him denying that she stabbed herself to cover up the murder.

It was reported that the accused had turned the murder weapon, a kitchen knife, on herself, slightly injuring her abdomen before police arrived at the scene.

She was put on her defence on December 13,201 after the prosecution proved beyond reasonable doubt that she stabbed Farid Mohammed 22 times with a kitchen knife.

She said that when the neighbours responded they had locked the door from inside.

During hearing of the case prosecution witness Ndwiga Gatumo, a landlord

said it was around 8.45am as he was preparing to go to church when he heard a male voice crying out for help in Swahili saying "nisaidie nasaidie amenidunga" ( Help! Help! She has stabbed me."

"I rushed out of my room and proceeded to where the man was screaming for help and peeped through the window. I recognised the voice as that of my tenant," said Gatumo.

On peeping through the window, the eye witness said he saw the deceased standing near the door to his bedroom.

"I was able to see a man shouting and the girl also standing infront of him holding a knife," the witness said.

The deceased told me to take the keys inside the house and open for him but the door was locked, the witness said, adding that he told Farid to try and defend himself as a man and even hit her breasts but he did not.

"I managed to break the window but could not reach the key, I could still see the girl holding the knife from where I was," the witness said.

Gatumo told the court that the deceased had blood stains all over his body.

Another witness police officer Joseph Otieno who was at scene shortly after the stabbing said he found Farid already dead.

distress call he was confronted by a blood sight.

Post a comment
WATCH: The latest videos from the Star
by By ALPHONCE MUNG'AHU
News
28 February 2018 - 09:30
Read The E-Paper