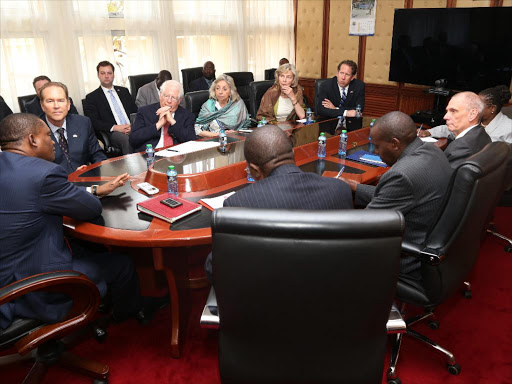 Government agencies and independent commissions spent Sh1.2 billion on hospitality and conferences between July and September last year, according to the Controller of Budget.

Out of this, Sh647 million was spent on beverages, while Sh590 million was paid for conference facilities..

This was, however, a significant decline of about 14 per cent from the first quarter of 2016 when the government ministries, departments and agencies spent Sh1.4 billion on hospitality and conferences.

According to the CoB’s latest report, the presidency separately spent Sh167.8 million on refreshments during the three-month period.

This is despite the government often announcing austerity measures to curb public sector recurrent expenditures.

The millions were spent on an tea, snacks, soda and flowers for receptions and entertainment of official guests for senior public officers during the first quarter of the 2017-18 financial year.

The Sports sector was the biggest spender among state departments at Sh104.9 million, followed by the Parliamentary Service Commission which spent Sh33.5 million for the three months.

The department of petroleum, however, is captured in the report as having used Sh100,000 only. That made it the lowest spender on the hospitality by government agencies, followed by Water services at Sh200,000.

University Education was a big spender on hospitality, having been invoiced Sh30.1 million.

The department of Public Service and Youth spent Sh19.2 million. The National Assembly incurred a bill of Sh18.8 million to refresh and entertaining guests coming to Parliament.

The Speaker of the National Assembly Justin Muturi as well as Clerk Michael Sialai usually receive courtesy calls from foreign envoys, ambassadors, delegations from foreign missions and other special guests.

Guests are also received by the Deputy Speaker, Majority and Minority leaders as well as their Whips.

The Salaries and Remuneration Commission — the statutory body which sets salaries and benefits for public officers — spent Sh18.6 million. The Teachers Service Commission spen Sh13 million in the 90 days.

As expenditure on secondary items in government soared, the office of the Director of Public Prosecutions consumed Sh13 million. The Public Service Commission used sh13.8 million.

While most state departments were on a spending spree on hospitality, the EACC, the Ombudsman and the spy agency — the National Intelligence Service —did not record any expenditure on the same.

The office of the Auditor General under Edward Ouko — the statutory agency that scrutinises government expenditure — also entertained guests to the tune of Sh2.5 million. The National Police Service Commission used Sh5.6 million.

In total, all the ministries, departments and agencies spent Sh1.3 billion on local travel.

The National Assembly, which is mandated to provide oversight, had the highest expenditure on domestic travel.

This is after it spent Sh394.1 million between July and September on its members travelling within the country.

This was a reduction of almost 50 per cent during the same period in 2016, when the National Assembly spent Sh623 million.

This could be attributed to the adjournment by the House in July to allow for the August 8 General Election.

Legislators mostly pocket these billions when they file mileage claims for domestic travel mostly to visit their constituencies.