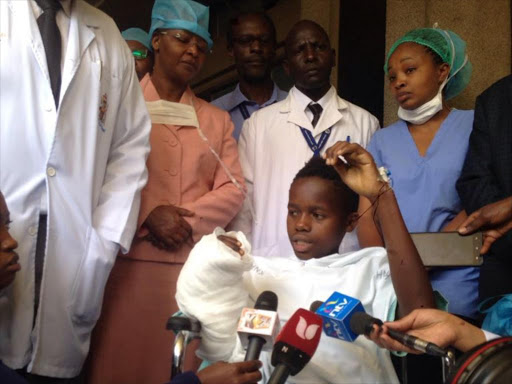 Surgeons at Kenyatta National Hospital have successfully reattached the hand of a 17-year-old boy which was severed by a grass cutter.

Joseph Theuri's right hand was cut off at the wrist on January 26 after the machine's power supply went on as he was cleaning it at their home in Kiambaa, Kiambu county.

"I did not immediately realise my hand

was not there. On checking, I saw my hand bleeding."

"The hand had been thrown away. I collected it and started shouting for help," Theuri told The Star on Wednesday.

The attempt to reattach

"Two teams were constituted with one team preparing the hand and the other team working on the stump. This was very important to save on time," Dr Wanjala Nang'ole said.

He led the operation together with Prof Stanley Khainga.

The two surgeons also teach at the University of Nairobi school of medicine.

The delicate procedure involved identification of blood vessels, nerves and tendons, aligning and fixing the bones, repairing and joining the arteries and the tendons.

Dr Nang’ole said the operation was highly successful adding that the blood flow was restored after three hours.

He said Theuri will be discharged after about 10 days but must attend physiotherapy sessions until the hand is completely healed.

At the time of the accident, the hand was wrapped in a polythene bag before he was rushed to Kiambu county hospital.

The medics managed to sanitise the hand and store it in a cool box.

Theuri was also given medication to stop bleeding and infection before he was referred to Kenyatta National Hospital.

KNH CEO Lily Koros said the boy was in severe pain when he was received at the facility.

"We immediately began assembling a team which included Kenya’s top plastic surgeons and theatre nurses among others," Koros said.

"This was the first ever such surgery in Kenya and sub-Saharan Africa," she said.

"We are pleased to inform the country that Theuri is recuperating well in the ward and has regained mobility of his fingers."

The tendons will take about two months to heal completely while nerves will be fully restored within four to five months.

Theuri dropped from school in Standard eight but told journalists that he is optimistic about his future.

"Nasikia poa sana. Wamenishughulikia vizuri sana. (I feel so good, they have taken care of me well)," he said.