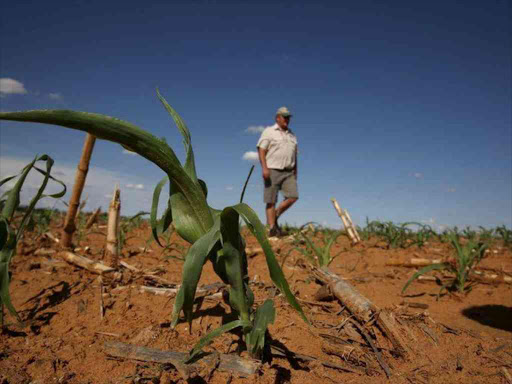 A farmer inspects his maize field in Hoopstad, a maize-producing district in the Free State province, South Africa, January 12, 2016. /Reuters

The western part of South Africa’s maize belt has been hit by drought and farmers there have only planted 70 to 75 per cent of the area they had intended to.

With the window of planting opportunity fast closing, the unexpected onset of dry conditions in the key maize-growing provinces of North West and the Free State could push depressed futures prices higher with implications for South Africa’s inflation outlook.

“Producers in the western parts of the country could not generally plant their intended hectares due to drought conditions,”

Grain SA said in a statement on Monday.

Parts of the maize belt experienced heat-wave conditions over the weekend and into Monday and in recent weeks did not get the rainfall that was expected from a La Nina weather system, which generally brings above-average precipitation to the southern African region.

Grain SA said only 70 per cent of the intended maize in North West had been planted and 75 per cent in the northern Free State, which between them account for most of South Africa’s maize crop.

The group said in the eastern province of Mpumalanga, producers had planted what they had planned to because of good rains but certain areas there were also now being scorched by hot weather.

The South African Weather Service still forecasts good rains over much of the grain belt for the rest of the summer season until the end of March.

The white maize futures contract due in March is down around 57 per cent from a peak of over 5,200 rand a tonne hit during a blistering drought two years ago, closing on Monday at 2,029 rand a tonne.

Depressed maize prices have helped to keep a lid on South African inflation, which was 4.6 per cent in November, the middle of the central bank’s target range.