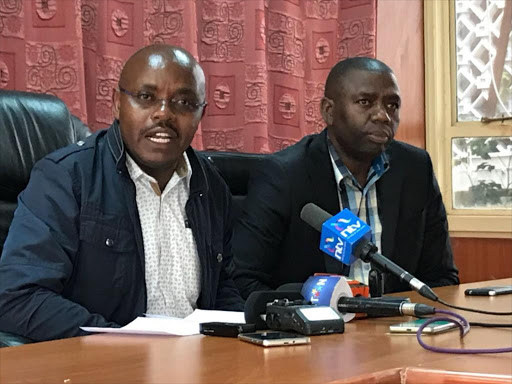 Two Laikipia MPs on Monday disputed assertions that police shot over 300 cattle during an attempt to flush out illegal herders last week.

They described the move as an act of cowardice and said it was unacceptable.

"It is not true that over 300 cows were shot dead. Our estimation is that around 25 cows were killed by police officers," Mariru

"The illegal herders used the cows as a shield as they engaged police in the shootout at Olmoran area."

Mariru faulted local leaders and senior politicians calling for compensation for the losses.

He said the leaders were engaging in "double-speak" since more than 50 people have died and 80 others injured due to cattle rustling in the area.

"Do Kenyans know 50 people died while 80 injured were injured in the hands of illegal herdsmen? We are very clear that the rule of law must be followed."

The MP claimed that over 300,000 animals have been stolen by assailants from the neighbouring counties of Baringo, Isiolo and Samburu.

He further said hundreds of small-scale farmers have lost their property to illegal grazers and that about six police officers have been gunned down.

"Who owns the cows that were allegedly shot by police? We have reasons to believe that they are owned by politicians and senior government officials," he said.

"They are not owned by the boys who graze them."

Kinyua said that they will hold peace meetings to quell tension and address the issue of illegal herders.

He disclosed that the meeting will be of leaders from West Pokot, Laikipia, Samburu, Baringo, Samburu and Isiolo to foster peace.

"We have been very accommodating to our neighbours but they have taken advantage of our kindness," he said.

"We want to remind them that our people should be respected and their properties."

But Wajir East MP Rahid Amin defended the herders saying the government has been using excessive force against pastoralist communities.

"If the government's intention is to curtail the economic activity of the pastoralist community, it should let us know," the MP said.

"We need justice. What crime did the herders commit? Action must be taken," Rashid also said, adding police should have taken measures other than shooting the cattle.

Kipkeu said the illegal herders, from Samburu and Isiolo, were heavily armed and started shooting at officers on patrol.