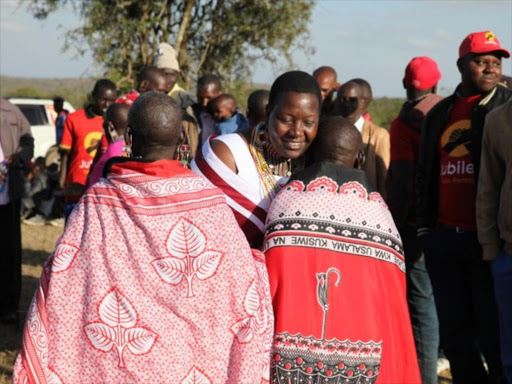 After outmaneuvering her illiterate father three times by the age of 18 to escape his plans to make her a child bride, Peris Tobiko decided the only way to protect other Maasai girls in

from harmful traditions was to become a leader.

She made national headlines when she was elected to parliament in 2013 - the first woman from her conservative Maasai community to win a seat - despite elders performing a death curse on anyone who dared vote for her.

"When I was growing up, I was just thinking: 'How do I get to defend the girl child?" 48-year-old Tobiko told the Thomson Reuters Foundation, seated in the leafy garden of her family home in the

"For me, it became the drive ... Women don't have a say and I thought I could become a voice and encourage others to come out and speak."

She campaigned tirelessly to win a second term in

Kenya's August elections as member of parliament for Kajiado East, where the dusty plains on the southern outskirts of Nairobi are rapidly urbanising.

Her convoy of four-by-fours kicked up clouds of dust as she sped between schools, farms and rallies, urging voters to re-elect her and President Uhuru

Kenyatta for another five years.

Regally seated under a blue and white tent, Tobiko clapped and smiled as men carrying traditional wooden sticks called on the crowd to vote for her and women in colourful Maasai beaded jewellery danced and sang songs of praise.

Her next dream is to become Kajiado's governor in 2022, an influential position with responsibility for basic healthcare, early education, local roads and other infrastructure in the east African nation's 47 counties.

has among the lowest female political representation in the region as women have struggled to make gains in the face of violence, intimidation and sexism.

Women hold about 22 percent of seats in parliament since an August 2017 election, up from 19 percent in 2013, according to figures from the Inter-Parliamentary Union (IPU), but these are mostly in nominated, rather than elected, positions.

Kenyan politicians, Tobiko is accompanied by an armed bodyguard and pays for extra security at public functions because of fierce competition for the $10,000 a month job.

"It definitely needs a lady who has prepared herself to grow a thick skin," she said, describing how her friend, Flora Terah, was abducted and tortured in 2007 when she stood for parliament.

Tobiko's two daughters were beaten up in their college car park after her 2013 victory by a group of young men who told them: "Your mother should not come for our seat".

"It was terrible," she said, adding that one daughter still has back pain as a result. "It has really traumatised them."

But it has not deterred her.

"If I shy away, then how else do we encourage other women?" she asked. "It's a cause I believe in and somebody must do it."

Tobiko's determination was clear from a young age. When her father first tried to marry her off, aged 13, she ran away and got older women in the community to report him to the police.

"It was not easy but I think it helped to shape a lot of my thinking, trying to make a difference in the life of children in that community," she said, laughing that she almost became the fourth wife of a polygamous old man who is now her constituent.

Tobiko's ambition was also fuelled by the wish to protect her mother who risked being cast out of her home by her in-laws for failing to produce a male heir after her husband died.

Being a mother to four daughters was as shameful as being barren, she said, as "girls are not considered to be children".

"I felt she needed either a boy or somebody who will act in that capacity," said Tobiko, who dresses traditionally in Maasai embroidered regalia with closely-shaven hair at her rallies.

"I knew I had to go to school, I had to work hard, to make a difference in her life."

They lived together with her father's second wife, who bore him 10 children, one of whom is

Tobiko's father only abandoned his plan to marry her off when she joined the University of Nairobi to study political science - and she met a husband of her own choosing, a banker.

After working for the government's pension fund, she ran for parliament in 2007 but came third.

The second time around in 2013, Maasai elders held a ceremony to curse her when she won the party primaries.

"The elders came and said: 'She will die ... Even those who vote for her, they will die'," she recalled.

But the younger generation defied them.

"They told their fathers: 'We are ready to die with her so let's see if your curses will work ... We are tired of the male leaders and so we want to try a different direction.'"

Some of the elders who cursed her are now her biggest supporters because of her track record, she said.

Education has been her priority, with her constituency budget focused on building and upgrading schools and paying bursaries to keep girls in secondary school.

"I think it is the one single factor that can change society," she said. "It's the long-term solution to all those harmful traditions."

At puberty, Maasai girls traditionally undergo female genital mutilation (FGM) to remove their external genitalia, before being taken out of school to become wives and mothers.

"It's like they are less human," said Tobiko, who was cut at the age of 10, describing how many girls die from profuse bleeding or during childbirth as a result of FGM.

She is glad the practice is declining, partly as a result of her own rebellious hunger for education as a girl.

"Some (parents) are saying: 'Now you see a girl can become anything in this life if you give them the opportunity."

"(Girls) inbox me and they say: 'Mum, keep on going, you are our mentor' ... That gives me the courage to continue and the energy to go on."