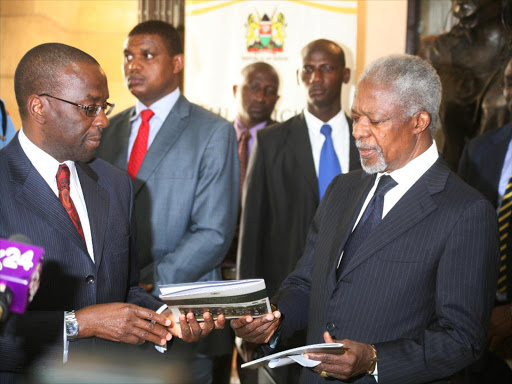 Chief Justice Willy Mutunga and the chairman of the AU Panel of Eminent African Personalities Kofi Annan after a meeting a the Supreme Court on October 9, 2012 / HEZRON NJOROGE

He was the chief mediator in the 2007-08 post-election violence crisis.

Societies cannot build legitimate institutions grounded in the rule of law if latent conflicts and bitterness of the past are not addressed, Annan said.

“From my own experience, I can say we have learnt that justice is not an impediment to peace – it is an essential partner,” he said.

Annan spoke at the opening ceremony of the AU Conference on Truth Commissions and Peace Processes in Addis Ababa, Ethiopia.

“I strongly believe that when we abandon justice to secure peace, we are most likely to get neither. Impunity can, and has, contributed to renewed conflict,” he said.

During the two-day conference, the Kofi Annan Foundation reviewed various reports of truth teams, including that of Kenya’s Truth Justice and Reconciliation Commission.

Annan’s warning comes after the collapse of the Kenyan ICC cases related to the 2007 poll bloodshed with no local process to try perpetrators.

“I stretch a hand of peace to my brothers in the opposition and ask them to join me in uniting Kenyans. Let us open a new chapter by selling our policies in a peaceful way and accept the decision of the people at the ballot,” Uhuru said at the weekend.

But opposition chief Raila Odinga wants truth, justice and reconciliation for victims of the post-poll violence.

“Justice was always intended to be our shield and defender. Without justice, the shield is gone, and we are exposed,” Raila said last week.

Annan said no society can remain prosperous without the rule of law and respect for human rights.

“Societies and individuals are entitled to know the truth about mass human rights violations. It is a human right and a value in itself. We should not silence the past,” he said.

“Archbishop Tutu put it this way: ‘However painful the experience, the wounds of the past must not be allowed to fester. They must be opened. They must be cleansed. And balm poured on them so they can heal. This is not to be obsessed with the past. It is to take care that the past is properly dealt with for the sake of the future.’”

Post a comment
WATCH: The latest videos from the Star
by FELIX OLICK @olickfelix
News
20 April 2016 - 05:00
Read The E-Paper