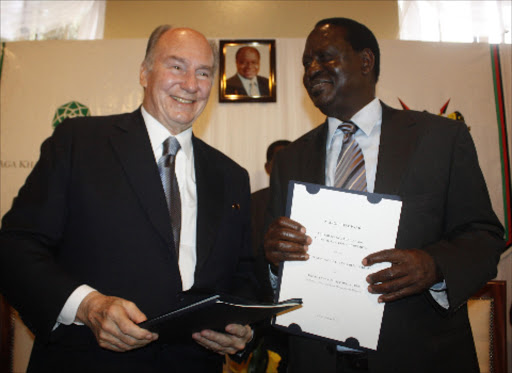 FINANCE: The Aga Khan with PM Raila Odinga after signing the agreement for the reha- bilitation of City Park at the National Museum in Nairobi yesterday.Photo/Charles Kimani

Nairobi City Park will soon wear a new face once a project to make it an environmentally friendly and financially self-sustaining facility is complete.

The park's modernisation, which is being done under the Nairobi City Park Rehabilitation Funding and Technical Assistance Agreement, was yesterday signed between the government and the Aga Khan Trust for Culture.

During the ceremony, a model of the new-look park was unveiled. The actual work is set to start next year. Prime Minister Raila Odinga, who signed the agreement for the government, welcomed the initiative.

“Nairobi is becoming a mega city with modern parks expected to meet many demands of city dwellers and in five years it can be completely transformed to a whole new East African region,” he said.

The Aga Khan said the project, which will give the park a new lease of life, will be good for the future generation. He is the founder and chairman of the Aga Khan Development Network.

“This project is expected to give new life to the park and impact the future generation not only today,” he said. The project, which will be replicated in other urban park areas, will include environmental improvements, landscape architectural conservation, enhancement and creation of new facilities.

“The park which lies on 60 hectares is a mixture of landscape and indigenous forest features and will greatly improve tourism, leisure and restore Nairobi to its former glory,” said Local Government minister Paul Otuoma.

The rehabilitation will be done in three phases with one being site surveys and collection of physical, economic and conservation data. The construction will be in the second phase while the third phase will be the setting up of operations and management of the park.

The project will be funded by the Aga Khan Development Network and other donors while the Aga Khan Trust for Culture will provide non-recoverable grants and funds.

The project's oversight committee will include government and the AKTC representatives, who will work with the City Council of Nairobi to ensure it is in line with the city masterplan.

Being one of the nine agencies of the AKDN, the Aga Khan Trust Center have ten parks and garden projects in its portfolio and has demonstrated that even in the most difficult contexts,parks can have a positive impact on a city if restored and maintained.

Post a comment
WATCH: The latest videos from the Star
by JOHN KIRIKA AND WENDY ONG'ARE
News
30 November 2012 - 00:00
Read The E-Paper