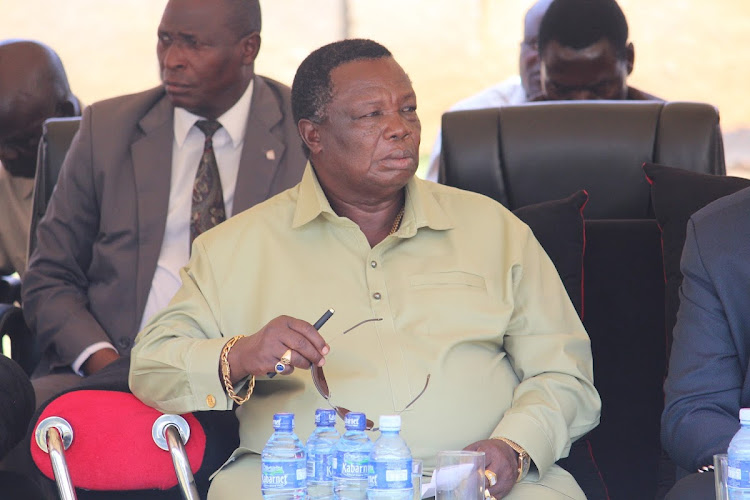 Members of the Azimio La Umoja One Kenya Alliance must stop putting pressure on presidential candidate Raila Odinga on who to pick as his running mate, Cotu boss Francis Atwoli has said.

Raila is expected to name his running mate by Monday, the deadline given by the Independent Electoral and Boundaries Commission for presidential candidates to do so.

There has been intense pressure on Raila to name former vice president Kalonzo Musyoka with his Wiper party allies threatening that he could bolt out of the coalition if overlooked.

Kalonzo is among 10 candidates who were interviewed for the position by a selection panel. The panel submitted three names to Raila to chose from.

Wiper party leaders are demanding that Kalonzo be picked as Raila's running mate or they quit the coalition.

Speaking in Bungoma on Saturday, Atwoli told off the Wiper brigade saying they should not put pressure on Raila on who to pick as his deputy.

"Those who joined this coalition did so willingly and understood the conditions so you should stop terrorising our presidential candidate Raila over positions," Atwoli said.

He said Azimio la Umoja knows where its votes are and those willing to leave are free to do so.

Atwoli also hit out at Deputy President William Ruto saying he has coned the church.

He called Ruto a corrupt politician who can never be trusted with leadership. Atwoli accused the DP of conning the church by giving huge donations then demanding part of it remitted back to him.

"He does not know when to stop. He is the kind that will bring Sh5 million to the church and then come back and take some millions back. That is not the kind of leadership this country needs," Atwoli said.

He was speaking during a funds drive at Kamusinga High School on Saturday.

Says Ruto turned against the Jubilee government a long time ago, and should now resign
Counties
3 months ago

Mudavadi is cheap, can disappear on a shilling - Atwoli

Musalia had dared Atwoli to try abusing him at his home turf.
News
4 months ago
“WATCH: The latest videos from the Star”
by JOHN NALIANYA
Western
15 May 2022 - 22:00