Task force on sugar sector revival to be known today 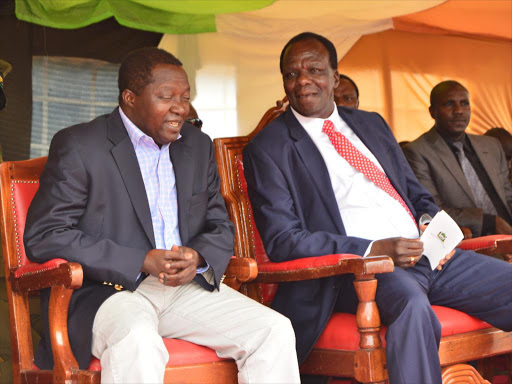 The task force on the revival of the ailing sugar industry ordered by President Uhuru Kenyatta will be unveiled today, co-chairman and Kakamega governor Wycliffe Oparanya has said.

Mashujaa Day celebrations in Kakamega, Uhuru urged Oparanya and Agriculture CS Mwangi Kiunjuri to form and co-chair a task force to come up with a framework on how to revive the sugar sector.

Yesterday, Oparanya said he and Kiunjuri met stakeholders in Nairobi on Monday and agreed on most issues.

The industry players who met in Nairobi included millers, farmer organisations and Agriculture Food and Fisheries Authority officials. Others were the national Treasury, ministries of agriculture and trade officials and representatives from the Lake Region Economic Bloc.

"We have asked the stakeholders to go and identify their representatives to the task force. We want a team comprising people with knowledge about the sector so that we have a report within 30 days,"

He said the stakeholders’ meeting agreed on most issues except the contentious zoning of the sugar belt. Zoning is part of the sector regulations gazetted early this year by the Ministry of Agriculture.

A number of Western leaders have opposed zoning, saying farmers should be allowed to sell their product to willing buyers ready to pay them on time.

Oparanya said the task force’s priority will be to ensure sugarcane farmers are paid arrears owed to them by their respective millers before focusing on revival of the sector.

In his speech during the celebrations, the President directed the Ministry of Agriculture and National Treasury to immediately put in place a framework to pay sugarcane farmers their Sh2.6 billion arrears owed by public millers after auditing the amount.

The money is owed to farmers by Mumias, Sony, Muhoroni, Nzoia, Chemilil and Miwani sugar companies.

"This money is for farmers and must go to them," the President said.

ANC leader Musalia Mudavadi has said the President should have constituted a commission of inquiry that would unearth the rot in the sector and recommend prosecution of the culprits.

The sugar industry supports an estimated 10 million people, largely in Western Kenya and employs tens of thousands people both on permanent and contract terms.

The once premier miller, Mumias is currently shut down over debts amounting to close to Sh 20 billion.

It owes cane farmers over Sh700 million. It is currently producing ethanol using bagasse and molasses from neighbouring millers.