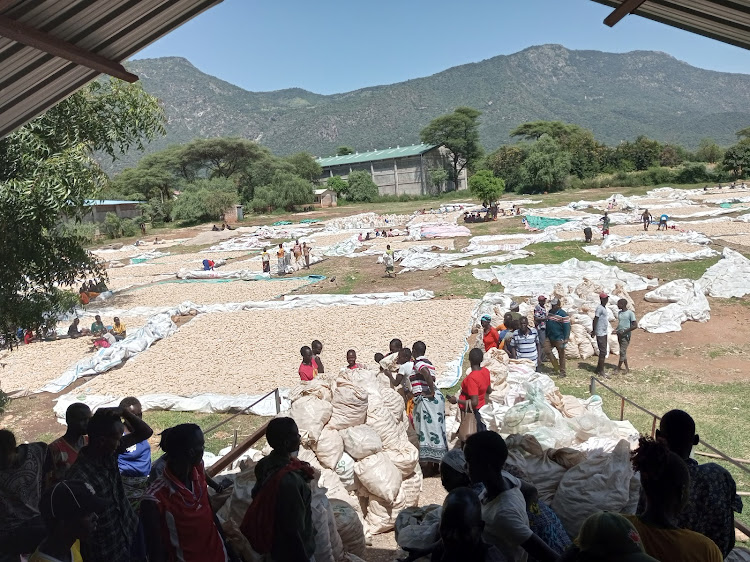 The region classified as semi-arid initially relied on relief food due to poor rainfall and crop failure.

The irrigation scheme has, however, now become a reliable source of income income, generating Sh80 to Sh100 million annually.

Naporos said the scheme is based on maize seed production through irrigation. Produce is sold to the Kenya Seed Company Limited.

The resulting socio-economic development has opened up the region, once known for cattle rustling and banditry.

The project was set up to mitigate drought and cattle rustling in ASAL and supports more than six constituencies in North Rift in food security.

"It is one of the transformative projects in the country and it is recording high yields,” Naporos said.

It had been difficult to access certified seeds. But through KVDA and cooperatives, farmers have been able to produce quality seeds with higher yields than ordinary ones.

Naporos said the irrigation scheme has upgraded living standards, since the produce sells at good prices.

“Most farmers in the irrigation scheme can raise school fees without difficulties because of the handsome pay they earn. We are committed  to ensure residents no longer rely on relief food," he said.

He said the authority was modernising farming to ensure farmers access and compete on international markets.

“We cannot rely on rain-fed agriculture as rainfall is unpredictable and uncertain," Naporos said.

"We must support farmers to excel. They have adopted new farming technologies to increase food production after the programme was revived in 2013,” he said.

The MD said the scheme covers 550 acres supporting 275 households in phases one and two. KVDA has started phase three covering 700 acres and contractors are already on site.

To help realise Vision 2030, the scheme is helping to improve nutrition.

“We are going to transform Kapenguria, Tiaty and Kacheliba, Lokichar and lower parts of Turkana and Lokichar, Naporos said.

There are other components of value addition, such as shelling maize at the seeds processing plant. Farmers are also able to grade seeds before taking them for packaging.

Naporos said the scheme has been rated among the best in the country. Farmers plan to establish their own seed packaging in the area.

The scheme has helped bring cohesion between communities warring over cattle rustling. Food production and availability is expected to promote the end of cattle theft and banditry.

“Sigor was a corridor for cattle rustlers. The scheme will help uplift the lives of residents in Tiaty, Kacheliba and Turkwel to reduce cattle rustling. It has helped in the establishment of Sigor town,” he said.

For diversification and improvement of the ecosystem, Naporos said the scheme has two million mango seedlings and other fruits to support agro-forestry and nutrition.

“We want to mitigate the effects of climate change because the area has experienced floods that affect production. The trees act as the vegetation cover, their roots holding the sol together on degraded land in the Cherangany ecosystem,” he said

Weiwei Irrigation Scheme vice chairman David Chepkisia said the scheme has saved residents from hunger that had plagued the area and has empowered them economically.

Chepkisia said the area under irrigation is still too small to meet the growing demands of the increasing population.

He called on the government to speed up phase three of the to help eliminate hunger in the region.

“We sell the maize seeds at Sh74 per kilo. We eat the male and plant the female maize seeds,” he said.

Chepkisia said the project has empowered so many residents that most households seldom depend on fundraisers to meet their basic needs.

“Most beneficiaries have built their homes, offering jobs to people from other areas, and hunger and cattle rustling have been greatly minimised,” he said.

Agronomist David Tanui said they have planted 2,000 tree seedlings, including apple and mango varieties such as Ngowe, Van Dyke, Kent and Tommy Atkins, among others.

The scheme is supported by KVDA with funds from the Italian government. It was initiated in 1984 1984 and revived in 2013 after collapsing for four planting seasons.

Being a pillar of our economy, it needs strategic investment and appropriate funds allocation for food security.
Opinion
1 month ago
Post a comment
WATCH: The latest videos from the Star
by KNA
Rift Valley
18 September 2022 - 22:00
Read The E-Paper