• Two excluded PWDs said will go to court to prevent swearing-in of all MCAs on Tuesday.

• Appeal to President Ruto, Governor Mutai to intervene. Said they were promised nominations but later scratched off list without notice. 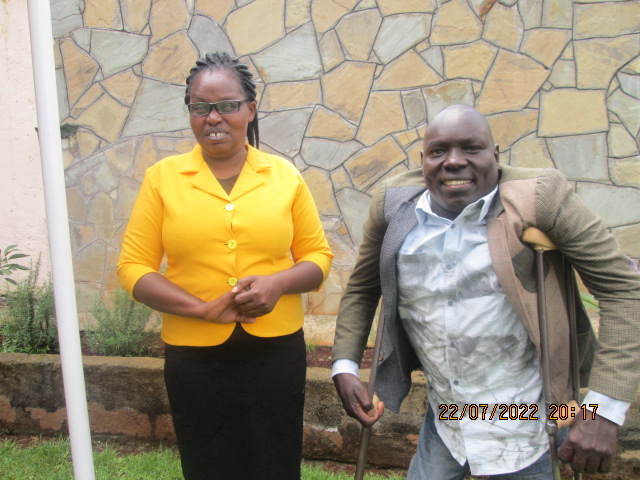 CORRESPONDENT TWO PWDS BEATRICE LANGAT AND BENJAMIN KOECH TO MOVE TO COURT TO STOP SWEARING IN OF MCASA AT KERICHO COUNTY ASSEMBLY ON TUESDAY
Image: BY SONU TANU

Two persons with disabilities plan to sue and block  the swearing-in of all Kericho MCAs after missing out on promised nomination slots.

Beatrice Langat and Benjamin Koech on Friday blamed elected Kericho leaders for shortchanging them, despite assuring them of nominations given to others without disabilities.

A peaceful demonstration by sympathisers with the two nearly halted business in Kericho town speakers accused Governor Eric Mutai of failing to intervene.

Speakers called on Senator Aaron Cheruiyot and Woman Representative Beatrice Kemei to intervene and if possible reinstate their names.

Langat and Koech appealed to President William Ruto to intervene and overturn nominations as investigations are underway.

At Kerichos Uhuru Garden on Friday the two and members of the public said they will head to court  to stop the swearing of all MCAs MCAs on Tuesday unless their plight is addressed.

The two learnt their names were replaced by nominees who are not disabled. They said dropping them for non-PWDs is a  violation of human rights in a democratic Republic of Kenya.

“If ever they found us unfit to occupy the nominations slots, those concerned should have gone for some of our PWDs colleagues who had applied for the same  nominations” Langat said.

In the initial stages, they said, they were assured they would be among the MCAS to be sworn in on Tuesday in the Kericho County Assembly

They learnt, however, their names were not in the list of those gazetted by the Independent Electoral and Boundaries Commission.

“Who replaced our names and what criteria did they use? Let Governor Dr Eric Mutai, Senator Cheruiyot and Woman Representative Beatrice Kemei tell us," Koech appealed.

To elevate select persons has become big business with a big price tag.
News
3 months ago

Its time for PLWD to be given offices to run, MCA aspirant

Ngunjiri accuses Kihika, her husband of nominating relatives as MCAs

"How will I sell that party next time? It will be difficult."
News
1 week ago

Polls agency chairman says lists can only be changed through a court order
News
1 week ago
Post a comment
WATCH: The latest videos from the Star
by SONU TANU
Rift Valley
18 September 2022 - 22:00
Read The E-Paper