•Under the ongoing programme, the department of fisheries will issue 80 new licenses

•According to the chairman Lake Naivasha Basin Landscape Association Paul Ruoya, fish stock in the lake was on the decline 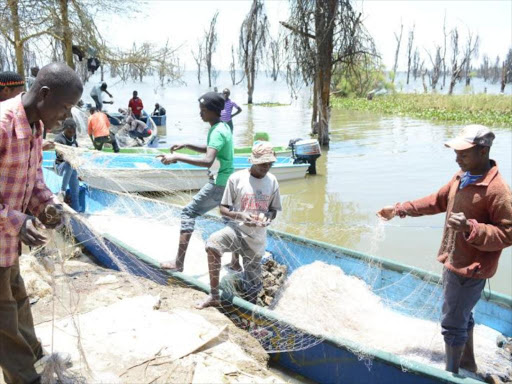 Lake Fishermen at Karagita landing beach, Lake Naivasha prepare their nets ready for an expedition as the department of fisheries moved in to increase number of fishing boats.
Image: George Murage

Foot fishermen in Lake Naivasha are among groups that will benefit from fishing licenses aimed at stemming the rising cases of illegal fishing in the water body.

Under the ongoing programme, the department of fisheries will issue 80 new licenses in the area despite a drop in fish catch in the last two months.

In the last couple of months, fish catch in the lake has dropped by over 80 per cent after the Kenya Coast Guard Service moved in to downscale its services.

According to Lake Naivasha Network group secretary Grace Nyambura, the licensing of the illegal fishermen would help address the current challenges in the lake.

Nyambura admitted that the presence of the illegal fishermen had adversely affected the fisheries sector as many of them were using undersize nets on the shores of the lake and breeding zones.

“The process of issuing an extra 80 fishing licenses in the lake has kicked off and some of the beneficiaries will be the illegal fishermen,” she said.

She called on the KCGS director general Vincent Naisho Loonena to intervene and increase the current number of officers before the fisheries sector collapses totally.

“The illegal fishermen are back in the lake after the changes made by the coast guards and fish catch is now at the lowest levels ever,” Nyambura said.

Naivasha deputy commissioner Mutual Kisilu said the vetting exercise was complete, adding that the targeted youth groups would benefit from the new licenses.

He defended the move to increase the number of fishermen in the lake noting that due-diligence had been taken before agreeing to increase their number.

He said that a study conducted by the Kenya Marine and Fisheries Institute had given the go-ahead to increase the number of boats.

“The research institute conducted a rapid analysis last month which has proved that the lake can accommodate more fishermen,” he said.

According to Lake Naivasha Basin Landscape Association chairman Paul Ruoya, fish stock in the lake was on the decline due to over fishing and use of undersize nets.

“We should look at how sustainable this issue is as currently the number of fishermen is too high against a drop in fish catch,” he said.

Number of illegal fishermen also declining, thanks to Coast Guard.
Counties
6 months ago