The late officer, who was a GSU driver, met his death in the line of duty.

• The late officer, who was a GSU driver,  met his death in the line of duty.

• GSU Commandant Douglas Kanja in a message of condolence read on his behalf by Chief Inspector Richard Bii, described the late Sergent as a dedicated and experienced officer 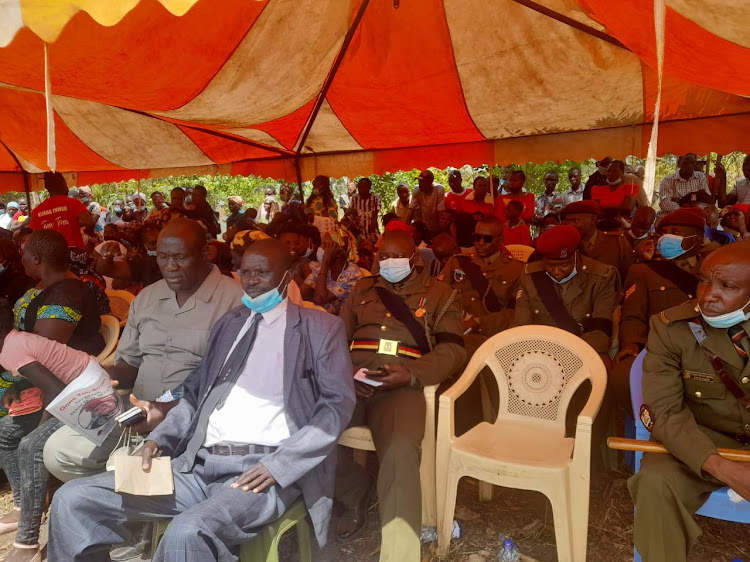 Dr Odongo Were ( in grey suit) father of the slain GSU sergeant Isaac Were . Behind him are senior GSU officers who attended the burial of their departed colleague
Image: DAVID MUSUNDI

The slain General service Unit Sergeant Isaac Odongo Were was on Thursday laid to rest in an emotional send-off at his Zea village home, in Endebes Sub-county in Trans nzoia County.

Leaders, friends, family, colleagues and the Zea community described the late as a generous and dedicated public officer who died in the line of duty defending the country from aggression.

The late officer who was a driver of the GSU land cruiser met his death after he and three other colleagues were attacked by suspected al-Shabaab militants at Milihoi, in  Lamu county while in line of duty.

The gang is believed to have attacked the police Landcruiser using a rocket-propelled grenade or an improvised explosive device.

They were also burnt beyond recognition.

GSU Commandant Douglas Kanja in a message of condolence read on his behalf by Chief Inspector Richard Bii, described the late Sergent as a dedicated and experienced officer who had left behind a legacy worth emulating.

Inspector Bii recounted how the deceased and his three other departed colleagues met their unfortunate deaths even as he wished the family comfort following the demise of their kin.

His widow Catherine Inyele said her husband was an extraordinary, remarkably loving and caring man adding that she was a pillar to her life and the 3 children.

"Indeed Isaac was a pillar to my life, my children, his father, relatives and friends. We were all secure and happy being with him and we will forever miss him. Fare thee well my love," she said amid tears.

His father Odongo, a retired teacher, asked the government to beef up fights against insurgency groups that have for years claimed lives of innocent Kenyans, police and KDF soldiers included.

''I'm asking the GSU Commandant to also address the issue of benefits which my son was entitled to in order to have his widow and children at least sorted," Odongo said.

Former Nominated MCA Ms Naomi Okul echoed Dr Were's sentiments appealing to the GSU commandant to personally intervene to have the late Sergeant's benefits directed to his widow and children.

''As a mother and widow, I know the great pain the widow of Isaac and children are undergoing now. It will look foolhardy for some other people to claim benefits from the sweat of the slain officer," she said.

Okul, an ally of ODM leader Raila Odinga, asked Trans nzoia residents not to be swayed by politicians who had no agenda for the country.

He told them to rally behind the opposition leader in the August 9 elections.

Nominated MCA Jane Gaitano wekesa who was also present challenged the government to comb through the Boni forest to nab or eliminate rebel groups that are terrorising Kenyans.