• Area MP David Kiaraho says he will continue to advocate for equality in education.

• While distributing bursary cheques to about 4, 500 students from Karau and Kaimbaga wards, Kiaraho emphasized the need for education to all. 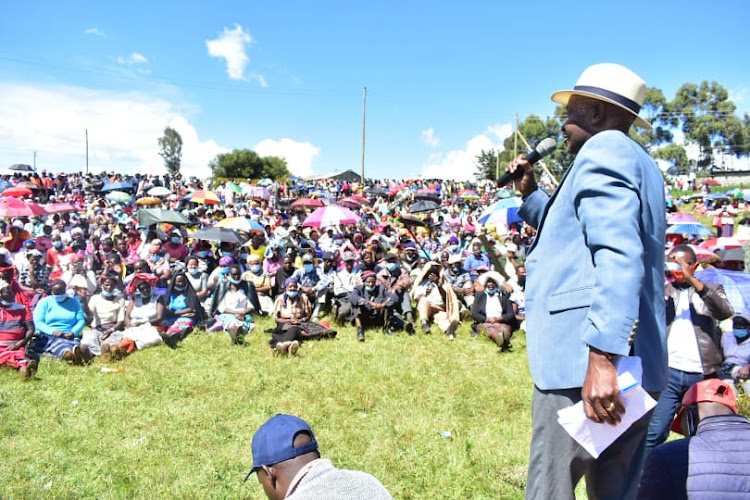 Ol Kalou MP David Kiaraho addresses the beneficiaries of the NG-CDF bursaries at Muiri primary school during the launch of the disbursement on November 17, 2021. About 4, 500 students, drawn from Karau and Kaimbaga wards, benefited.
Image: ANGELINE GATHONI

Ol Kalou constituency has continued to record a high number of applicants seeking bursaries as the area MP David Kiaraho says he will continue to advocate for equality in education.

While speaking at Muiri Primary school, Kiaraho noted that the National Government Constituency Development Fund, NG-CDF, had boosted the standards of education, leading to a high number of beneficiaries in tertiary institutions and boarding schools, unlike before.

While distributing bursary cheques to about 4, 500 students from Karau and Kaimbaga wards, Kiaraho emphasized the need for education to all, stating that “education is the great engine for personal development.”

“It is through education that the daughter of a peasant can become a doctor … that a child of farm workers can become the president of a great nation,” he said, quoting the words of Nelson Mandela.

He further stated that he was on the frontline to ensure that he delivered his promise to the residents as far as matters of education were concerned.

“It’s a great honour for me to see thousands of our secondary and tertiary students join or continue with their studies uninterrupted. Nothing gives me greater satisfaction than seeing the dreams of these young people who represent our future, achieved,” said Kiaraho.

The beneficiaries expressed their gratitude stating that the funds were disbursed on time and the allocation was done fairly.

“I thank the NG-CDF for issuing the bursaries to us as this will ensure that no bright student will miss classes due to lack of school fees. The funds are of great benefit to me as they will ease the burden of school fees on my parents,” said Jack Njoroge, a student at Nyandarua National Polytechnic.

Stephen Njiraini, a Mirangine ward resident lauded the NG-CDF committee for their efforts in seeing that all potential students from needy households were in school through the issuance of bursaries.

The Committee’s chair Samuel Nyaga, while encouraging learners to work hard in their studies, also advised them to avoid substance abuse and called upon parents to ensure that the learners were in school.

“It is only through education that we have the power to transform our society and provide children with the protection they need from the hazards of poverty, labour exploitation and disease and giving them the knowledge skills and confidence to reach their full potential,” said Nyaga.