The town, which stretches back to as early as the colonial days, is still struggling to have basic amenities. 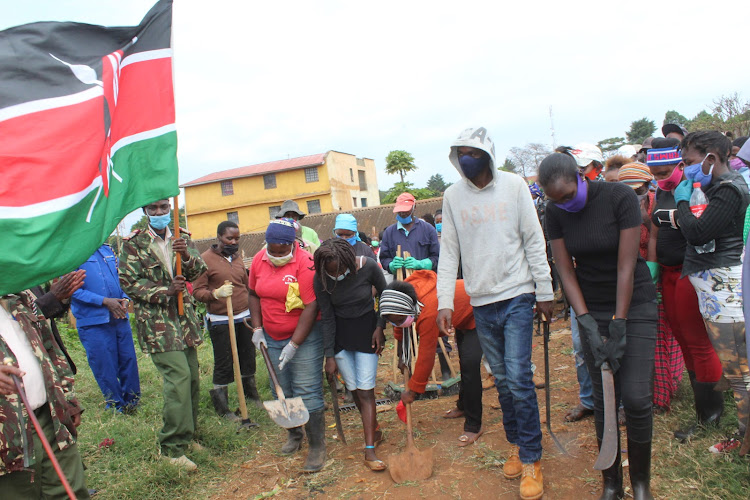 A person flying over the sprawling Majengo slums in Nyeri town may vividly recall J.P Clark’s poem, Ibadan, that graphically described the slum life in one of Nigeria’s oldest towns at the turn of the 20th century.

But unlike the city of Ibadan which has outlived Nigeria, Majengo is as old as Nyeri town, stretching back to as early as the colonial days.

Unfortunately, nothing much has grown here save for the rusting tin roof topped shanties with gaping mud walls that date back to the 1910s.

Here, residents still do without proper roads, sanitation and safe drinking water despite the county boasting one of the best water supply lines in the country.

In addition, the majority of youths here have no formal employment since they lack requisite papers that can secure them salaried work.

And for those who have made it to university level, the story is the same as many of them usually troop back here once they fail to land an opening in the job market.

The community mosque at the heart of Majengo is perhaps the strongest link that keeps the 5,000 residents in this area bound together in a close-knit family that knows no bounds.

And surprisingly, it is from their strong religious bond that the dwellers of this dusty abode are dreaming big and looking forward to transforming their fortunes for the better.

A housing project which began in 2019 and estimated to cost a total of Sh65 million, and currently on its third storey, could be the silver bullet that will bring smiles to the people of this area.

The building, which has so far gobbled Sh25 million and is expected to be completed in June next year, is being  funded by the families that live here, a majority of whom can barely make it.

Mzee Iddris Suleiman, a member of the construction committee and the Nyeri Supkem chairman hails the sacrifice of the community and singles out the project as a game changer in the area in terms of fighting poverty and crime.

“This project is solely a result of the goodwill of the people of this area,” Suleiman says.

“We have received no help from anyone, not even the government since we began. Every single coin is the sacrifice of those who live here."

Once complete, the establishment is expected to rake in at least Sh500, 000 every month as rent from tenants, assuming the entire building that consists of one and two bedroom houses will be fully occupied.

Part of the proceedings from the housing project will then be channeled towards meeting the overheads for running the mosque, assisting the elderly, widows and orphans.

Suleiman also believes the project may open up other enterprises that will assist dozens of jobless youths in the vicinity to start some form of self-employment.

“This project will eventually help many of the people residing in this place," he says.

"In the meantime, we intend to use the proceeds in paying for the day to day costs of running the activities of this mosque and assisting widows and orphans who have no source to fall back to.”

The project, which is the first of its kind in the larger Mount Kenya region, is expected to be replicated in similar settings in other counties to ensure those living in such conditions can get a decent living.

Abu-Bakr Asman Hamisi, who is the project manager and director of the Nyeri Muslim Association, says apart from the project, they are similarly initiating other empowerment programmes for the youths.

Hamisi says many of the youths in the area having nothing worthwhile to do with their lives have turned to drugs and alcoholism which is a ready fodder for them to move into criminal activities.

The mosque has also been a vital link in connecting them with teachings that can help them turn away from wayward ways and turn a new chapter in their lives.

The association has also come up with fundraising initiatives to assist needy families in times of sickness and bereavement.

“We really felt we needed to address the pressing needs of our people, the majority of whom can barely make it in life," Hamisi says.

"A member decided to donate this piece of land and after deliberation as a community we decided to start this housing project which can, in the long term, be an income generating initiative.”

The greatest challenge at the time of beginning the project though was modalities of pooling together the colossal amount of money needed to undertake such an investment.

To start with, many of the dwellers in the 93 plots that dot the area have nothing they can call their own apart from the hovels they live in.

To address the challenge, it was decided that a fundraising be held to source for funds for the initial work.

This was done in 2019 at the Dedan Kimathi University of Technology where Sh2 million was realised.

Ironically, none of the leaders from the county who had been invited to the event showed up leaving the conveners on their own.

To date, according to Hamisi, the association has been dependent on contributions from its members.

At times, donations from well-wishers also come by that help in purchase of much needed materials such as cement, sand, machine cut stones, iron rods and wiring piping to keep the work going.

“The first question that cropped up when we decided to start this project was where the money was going to come from putting in perspective the poverty levels among our people,” Hamisi says.

Despite the ravages of the Covid-19 outbreak, the official is confident the project is on course, and soon the long cherished dreams of the community will come to fruition.

The association has also set aside Sh30,000 as startup kitty for unemployed youths which they hope to scale up to an amount that can finance training on practical skills that can empower the locals.

He however faults the government for giving the community a wide berth at a time they really need help to improve the livelihoods of three generations that have almost become synonymous with poverty.

“We at times feel like we are second class citizens here.Youths finish school and even college but have nowhere to go after that. Having nothing else to do they end up engaging in drugs and other criminal activities," he says.

"We therefore feel that after this project, we will be able to train these youths in technical skills to empower themselves.”