Rising water levels have led to submergence of nearly all riparian land, destruction of crops and structures 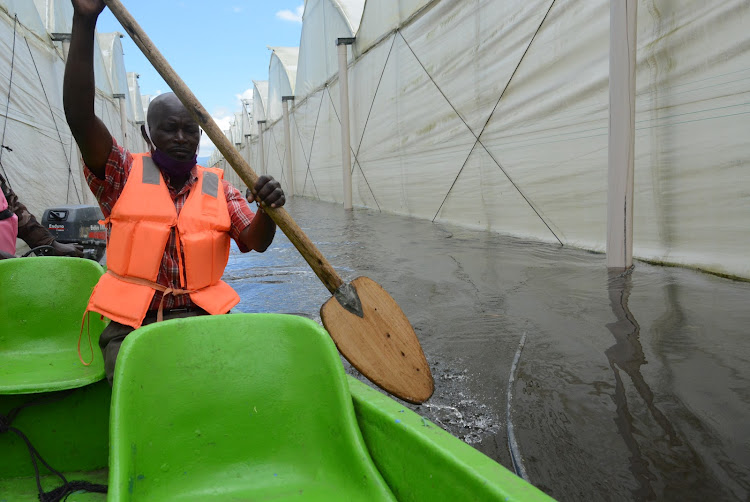 SWELLING LAKES A man rows his boat between green houses at a flower farm in Niavasha, Flower farms are the most affected in the region as Lake Naivasha expands.
Image: LOISE MACHARIA

About 76,000 families have been displaced by swelling lakes in Rift Valley since the mysterious increase in water bodies started in 2010, a scientist has said.

Thechla Mutia, a senior environment and natural resource scientist, said lake level rise has led to submergence of nearly all riparian land, destruction of crops and structure and displacement of thousands of people. Mutia is attached to the Geothermal Development Company in Nakuru.

Speaking during a recent workshop for journalists organised by Internews’ Earth Journalist Network in collaboration with Egerton University, Mutia said the water rise in lakes and dams in Rift Valley started in September 2010 and significantly spread to many areas in 2013.

“The situation worsened during the 2019 mild El nino periods as per the Kenya Meteorological Department,” she said.

The situation led to the loss of livelihoods, injuries, disease outbreaks, security and safety implications and negative mental, physical and social effects on human lives.

Mutia added that the displacements led to the loss of services, socio-economic disruption and ecological or environmental degradation.

In Baringo, schools, hospitals, hotels and roads, situated within several kilometres from the shores of Lake Baringo, were submerged as residents feared that the fast growing lake might join neighbouring lakes Bogoria and 94.

Mutia said an interplay of factors contributed to the increased water levels, among them increased moisture availability as seen in the discharge of rivers feeding the lakes, and increased runoff due to land-use changes.

“Change of land use has over time added to siltation of the lakes as shown by sedimentation and sediment load in the rivers,” she said.

She said the severity of land degradation has resulted in higher rainfall runoff from land and less percolation in groundwater systems, leading to larger volumes of water flowing directly and rapidly from the land surface into the lakes. 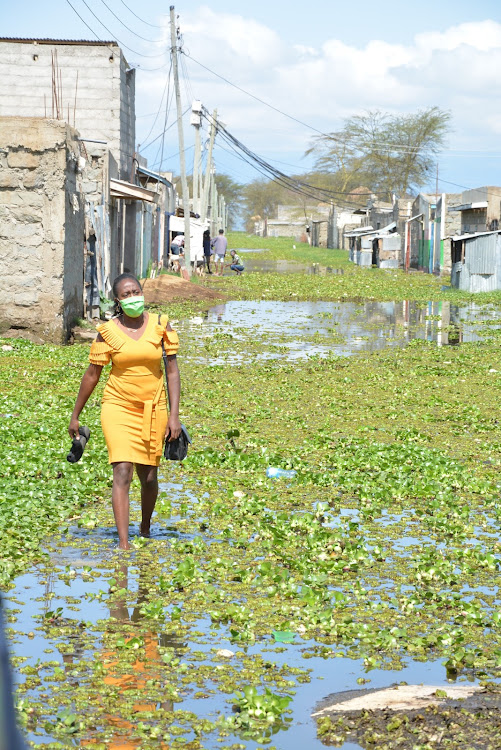 The scientist said Rift Valley’s geologic structures were also at play in the swelling-lakes mystery, saying the water bodies were in faulted terrains (controlled by geological structures) that were geologically active.

“The geological activities affect water composition and biodiversity, which can explain the absence of flamingoes whose feeding is supported by algae growth, that has been affected by the change in alkalinity of the waters of Lakes Nakuru, Bogoria, Magadi and Elementaita,” she said.

Last year, the government issued several alerts for people downstream of the Tukwel dam to relocate to safe grounds as it was on the verge of breaking its bank.

Mutia recommended flood control and catchment-wide conservation practices to reduce the impact of floodwaters on lives, livelihoods and property.

"The government and the relevant agencies should conduct a focused study on hydrochemistry of the lakes, particularly on isotope studies and carbon dioxide saturation monitoring, to understand the lake dynamics, as well as the associated hazards due to swelling,” she said.

Mutia reiterated the need to conduct studies on land use/land cover, as well as water balance studies on all lakes and their respective basins, to inform the establishment of the highest water point under the worst-case scenarios in the history of the lakes.

She said the study would help in defining and demarcating the lake boundaries and urged the government to buy off the affected areas to create a buffer zone.

She added that drilling and installation of groundwater monitoring boreholes would help determine the likelihood of episodic recharge within the aquifers due to heavy rainfall against groundwater saturation potential.