Experts divided on the causes of the unprecedented flooding - from siltation to tectonic plate movement.

• The investigating team will soon hand over its report. 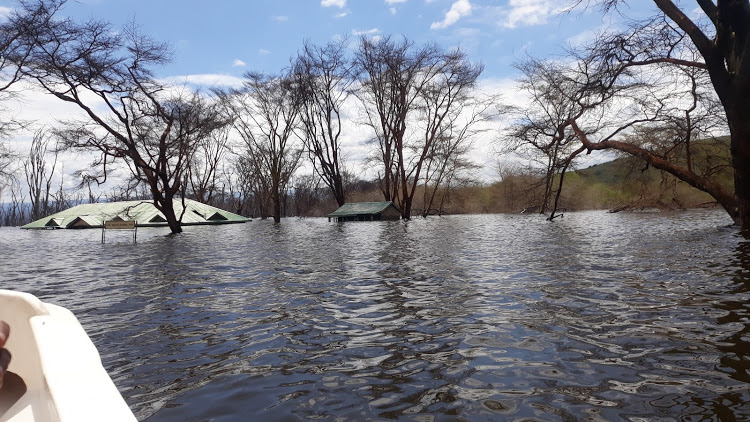 SUBMERGED: What used to be the Kenya Wildlife Service office and canteen are submerged in Lake Nakuru. The lake has been swelling since early 2013.
Image: LOISE MACHARIA

The technical committee studying rising rising lakes in the Rift Valley has almost completed its report.

“Lakes have been rising and have caused harm, destroyed wildlife," Kiptoo said. Thousands of people have been displaced.

He commented at the Serena Hotel, Nairobi, during a meeting to rally Kenyans behind the government's bid to increase forest cover.

Forest cover stands at 7.2 per cent, the constitutional requirement is 10 per cent.

For a number of months, water in lakes Naivasha, Elementaita, Bogoria, Baringo and Turkana have been rising sharply.

The lakes have been rising since 2013.

As the technical team finalises the report, experts have been giving divided opinions on the causes of the phenomenon.

Some experts point to heavy rains, while others say silt has built up, making the lakes shallower, less able to hold water. Silt has been caused by runoff from land that has been laid bare or overcultivated.

Some scientists and environmentalists blame it on global warming and habitat degradation.

Seismologist attribute the rising levels to the tectonic movements of the earth's crust.

"It is clearly an aspect of climate change and silt that has increased in water bodies as a result of degradation.”

The government formed a technical committee in October to study the rising water levels. It was urged to do so by the National Security Committee.

Members of the technical team include experts from the National Environment Management Authority, the Water Resource Authority and geologists.

Nakuru and Baringo residents have been especially hard-hit and displaced.

The higher water levels in lakes Nakuru, Bogoria and Elementaita have forced flamingoes to fly away.

They left because pH levels and algae production have been interfered with. Flamingoes feed on algae, which is becoming scarce. Ph is the measure of how acidic/basic water is.

In Baringo, more than 30,000 people have been displaced and schools, hospitals, roads, beach hotels, farms and homes submerged after Lake Baringo overflowed its banks and water spread rapidly.

Lake Baringo has breath-taking sights and teems with with birds, fish, hippopotamuses and crocodiles.

However, not all of them can survive in the alkaline Lake Bogoria nearby.

Due to the increased water levels, experts are worried that the two may merge, creating an ecological disaster.

Six of the fatalities caused by depression and associated mental illnesses
News
2 years ago
Post a comment
WATCH: The latest videos from the Star
by GILBERT KOECH News Reporter
Rift Valley
19 November 2020 - 22:00
Read The E-Paper