They invade farms at night and destroy sorghum, maize, and sweet potatoes by feeding on their leaves. 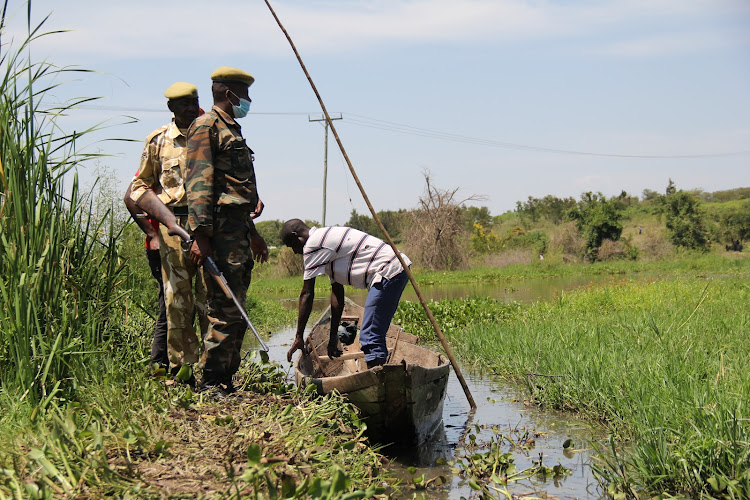 Officers from Kenya Wildlife Service (on board a fishing boat in Lambwe on April 23,2022.
Image: ROBERT OMOLLO

Some residents from four villages in Lambwe, Suba South constituency, are counting losses after hippos destroyed their crops.

The residents from Matunga, Lwala, Ruma Pap and Opuch said they were staring at starvation after their food crops were destroyed.

The hippos invade farms at night and destroy sorghum, maize, and sweet potatoes by feeding on their leaves.

Resident and victim Alice Odino said the Hippos whose habitat is Lake Victoria go to their farms through River Lambwe to look for food.

“These hippos have become a menace. It’s very hard to deal with them because they invade farms at night,” Odino said.

Speaking to journalists on Monday, Odino together with her colleagues asked relevant authorities to help them.

She said the hippos have proliferated and increased in number making them quickly destroy any farm they invade.

Odino asked Homa Bay county to help them with seeds for replanting.

“We’re helpless and soon staring at hunger because the hippos have destroyed our food. There should be an urgent intervention before the ongoing rains reduce,” she said.

Crops standing on more than 25 acres have reportedly been destroyed in the last week.

Residents say animals have been invading farms since February but no action has been taken by KWS.
Counties
9 months ago

MP tells service to intervene and contain rising cases of human-wildlife conflict.
News
1 year ago
“WATCH: The latest videos from the Star”
by ROBERT OMOLLO
Nyanza
09 May 2022 - 22:00