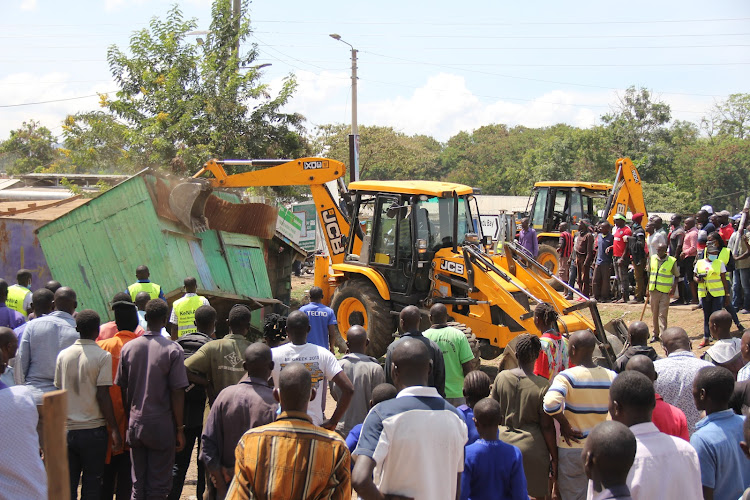 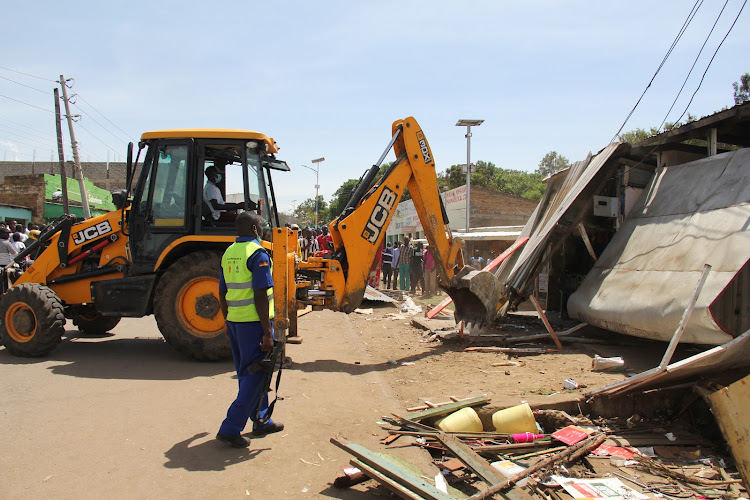 Hundreds of traders in Homa Bay are counting losses after Kenya National Highway Authority demolished their premises along the road reserve.

The traders who operate in Homa Bay, Kendu Bay and Mbita towns decried that Kenha did not give them notice before the demolition was undertaken.

The agency began demolishing structures in Kendu Bay on Thursday morning before proceeding to Homa Bay and Mbita.

A number of traders accused Kenha of making them incur unprecedented losses.

Traders Charles Onyango, John Obuya and Roselyn Muturi said they had just built a hardware a few days ago but the house was demolished.

Onyango said he had just paid rent to the county government a few days before the demolition.

“I just paid  rent for my plot three weeks ago and I was not told my house would be demolished. I was surprised to see bulldozer demolishing my house," Onyango said.

“I was selling soda, flour, and other goods. What is appalling is that they have demolished the house with everything including my refrigerator,” Obuya said.

Another trader Elida Anyango said some lost their property through looting during the exercise.

"There was confusion and some people pretending to help us to relocate our property disappeared with some,” Anyango said.

The demolition has also affected trading centers like Adiedo, Kadel, Nyangweso and Olare.

The traders said the demolition had caused a serious economic drawback in the area.

The KeNHA Director in charge of Nyanza region Cleophas Makau said they conducted the demolitions to reduce accidents.

He argued that the structures built in road reserves obscure visibility in roads.

“Interference with visibility on the road causes accidents. That is why we are cleaning road reserves,” Makau said.

He denied claims that they did not give the traders notices ahead of the demolition.

“We gave the traders notices in October last year and sensitised them,” Makau added.

MP Mulyungi met with KeNHA officials, agreed no building will be pulled down.
Eastern - Page 26
2 years ago

More than 100 traders whose kiosks were pulled down by the national highways authority say they lost Sh20 million property. The Kenya National ...
Counties
4 years ago

A group of Gikomba traders has petitioned Interior CS Fred Matiang’i to investigate the fire. The fire, which happened last Thursday, is suspected ...
News
3 years ago
by ROBERT OMOLLO
Nyanza
21 January 2022 - 22:00