Three fishermen died after their boat capsized in Mbita 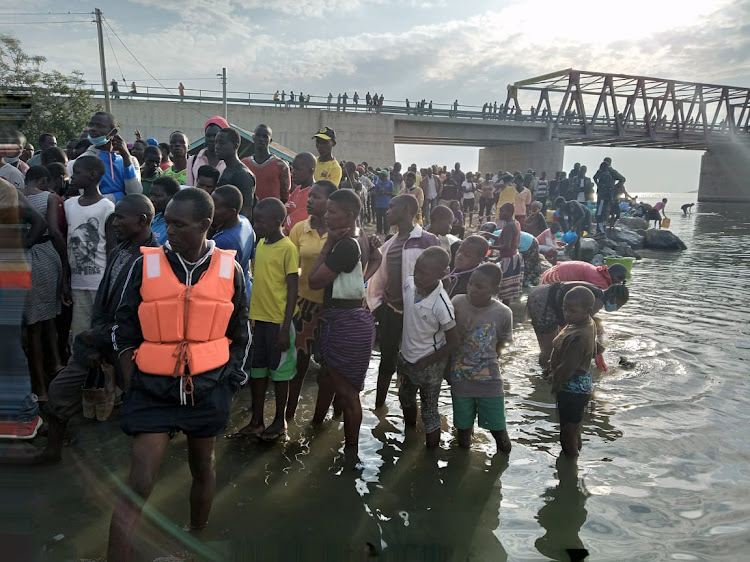 TRAGIC FISHING EXPEDITION: Some residents near the scene where the boat accident occurred in Mbita, Suba North constituency on October 10.
Image: ROBERT OMOLLO

Three fishermen died while two others escaped after their boat capsized in Lake Victoria at Nyagina beach in Suba North constituency.

The five fishermen from Kombe beach were on their way to Koguna beach for their routine fishing expedition when their boat capsized.

The incident which occurred near Mbita bridge is linked to strong winds at the lake.

Mbita resident Hezborn Dondi said the incident occurred at around 4am.

“They normally go for their fishing activities at night when the lake is calm. But it is unfortunate they drowned after the vessel overturned due to strong winds,” Dondi said.

One body has been retrieved as search operations continue.

Atavachi said the fishermen encountered strong winds when they were about to cross the bridge on their way to Koguna beach causing the boat to capsize.

“We’re advising fishermen to be wary of changing weather patterns in the lake during this rainy season. Let people not get into the lake at odd hours,” Atavachi said.

Speaking to journalists on Sunday, the police commander said they have called on the Kenya Coast Guards Services to help them locate the remaining bodies.

The boat was ferrying people from Homa Bay to Ndhuru beach in Suba North.

Odhiambo called on the beach management officials to implement rules regarding fishing activities in the lake.

She said safety measures must be adhered to.

“Life jackets must be mandatory to each person before one gets into the lake. Boats must be sea worthy and not carry excess,” the MP said.

She said her office is facilitating local divers to help in the search for the remaining bodies.