• Kenya County Government Workers Union had issued a seven-day strike notice of their intention to proceed on strike starting July 4, 2022.

• In February this year, the workers had downed their tools protesting delayed salaries, poor working conditions, among other issues. 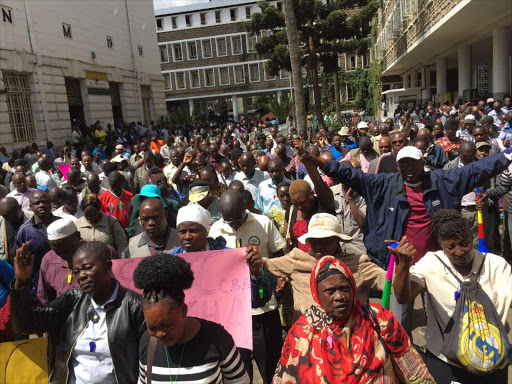 Nairobi County workers will on Monday down their tools City over the unwillingness of the county government to address their grievances.

This comes after the Ann Kananu-led administration failed to commit to addressing grievances raised by the workers’ union last week.

The staff union, Kenya County Government Workers Union, had issued a seven-day strike notice of their intention to proceed on strike starting July 4, 2022.

Among the issues cited by the union include persistent delays by City Hall to pay their salaries, failure to complete promotion of all eligible staff, unwillingness to finalise CBA negotiation, perennial electricity disconnections, and intermittent NHIF medical cover due to failure to pay premiums and remit monthly deductions.

This is in addition to non-remittance of October and December 2021, and May 2022 deductions, failure to refund illegally deducted PAYE from new constables and firemen, non-payment of staff allowances, imprests and per diems.

Nairobi Staff Branch Secretary Festus Ngari accused City Hall of failing to commit to addressing issues they raised hence leaving them with no chance but to proceed with the industrial strike.

He said that the county government has constantly treated their issues with a lacklustre approach despite the matters being weighty.

“Your reply letter is a testament that your office is not in any way committed to fulfilling the urgent needs of our members and that there has been no single action transcending mere words of assurance,” Ngari said.

His counterpart, Calvince Okello, decried that their members’ fundamental human rights, including access to healthcare and labour rights, continue to hang in the balance due to City Hall’s actions, misactions and inactions.

“In effect, therefore, we are left with no option but to seek the enforcement of our demands by invoking Section 76c of the Labour Relations Act, 2007 which we hereby do and notify you that our intended industrial action by way of a strike shall go on in the manner prescribed and as scheduled on 4th July 2022 as we had earlier communicated,” Okello said in a letter dated June 29, 2022.

In the response by City Hall, acting County Secretary Dr Jairus Musumba informed the union that the county government is in the process of addressing all the issues they raised.

However, the letter did not give commitments on the timeline of the same, only requesting the union’s patience.

“This is to inform you that the Nairobi County government is in the process of addressing all the issues raised and requests your patience as this is ongoing. As previously agreed, Governor Ann Kananu confirms her commitment to the welfare of our workers. Once again, kindly reconsider the union’s stand in regard to the strike,” said Dr Musumba in the letter dated June 28, 2022.

However, this is not the first time that City Hall staff are threatening to strike over delayed salaries.

In February this year, the workers had downed their tools protesting delayed salaries, poor working conditions, among other issues.

This is how I will tame cartels at City Hall - Sakaja

He said the first step is to dissociate from the the shadowy clique.
News
1 month ago

They are protesting over lack of promotions and poor contractual terms.
News
2 months ago
WATCH: The latest videos from the Star
by MAUREEN KINYANJUI News Reporter
Nairobi
01 July 2022 - 10:17
Read The E-Paper