• Igathe said his administration will also create a program where we can infuse young people so that they too can serve in the county. 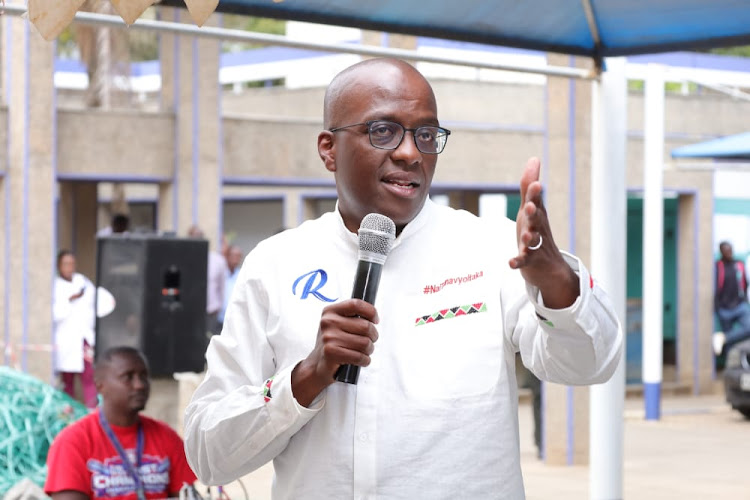 Nairobi Gubernatorial candidate Polycarp Igathe has assured city hall staff that none will be sacked before retirement age, if he is elected.

To ensure that the youth can also work in the same environment, Igathe said his administration will also create a program where we can infuse young people so that they too can serve in the county.

“Let it be known that I'm not coming to fire old workers and bring in new people to work within Nairobi City County. You will serve till retirement age,” he noted.

The 2019 Biometric Card Registration report revealed that about a half of Nairobi County government employees are aged 50 and above with most set for retirement.

The recommended retirement age is 60.

The report, commissioned by former Governor Mike Sonko was aimed at weeding out ghost workers and eradicating impostors pretending to be Nairobi County employees.

The Jubilee party candidate said that his administration with Phillip Kaloki (running mate) will be all inclusive.

He revealed that they will first meet county staff to listen to their grievances as well as challenges faced by the county.

“The first town hall meeting will be held during this campaign, we will start with the county workers. Nobody understands the challenge, the problem of Nairobi more than the workers of the Nairobi City County. I will be calling on them and asking them to come and tell us what they like,” Igathe said.

On his side, Kaloki said under their leadership, regular training of workers would be conducted .

"Together with the Governor, we will improve the general working conditions within the county and champion healthy working environments that will empower workers to work and provide efficient services in Nairobi," he added.

Igathe an Kaloki have been doing people to people campaigns, visiting different city estates and talking to area residents.

Igathe who is from the Azimio la Umoja camp will face off with Johnson Sakaja of the Kenya Kwanza Alliance.

Sakaja is the current Senator of Nairobi County, while Igathe served as Deputy governor for a few months before he resigned.

My manifesto will be people-centered - Polycarp Igathe

According to Igathe, his manifesto will be based purely on service delivery for the people.
Counties
1 month ago

Wanyonyi had Raila to allow him manage Nairobi affairs ahead of the election.
Counties
1 month ago
WATCH: The latest videos from the Star
by MAUREEN KINYANJUI News Reporter
Nairobi
25 May 2022 - 16:05