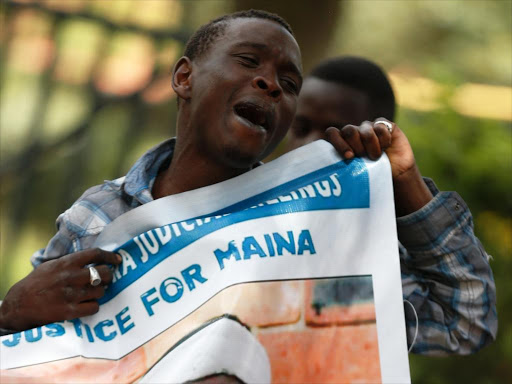 The mother of a university student killed by police is disappointed with the slow pace of investigations into his death.

“It is one month since my son was shot. Even though Ipoa took up the matter, I have not seen any progress in the investigations,” Josephine Wangare said on Tuesday.

Carilton Maina, a 22-year-old Leeds (UK) University, was shot dead by the police in Kibera’s Laini Saba on December 21 . He was on his way home after watching a football match with friends.

“I at times wonder if there is any justice in this country,” Wangare said.

She was speaking in Nairobi during a protest by university students against the killing. The protesters called for speedy police reforms to end extra-judicial killings.

“It is very painful. We have not seen any justice. It is not just my son, there are other students who have also been killed by the police and we want justice,” the disressed mother said.

She called for full application of the law to ensure that any officer who misuses his or her firearm faces severe punishment.

The speedy conclusion of the investigation will put her mind to rest, she said, adding that she has had disturbed sleep since the incident.

The Independent Policing Oversight Authority’s head of communication Denis Oketch told the Star yesterday that investigations into a matter like Maina’s killing cannot be hurried.

“No case takes a day or two to be investigated because we have to gather information, talk to several people including the public and collaborate the allegations. That might take around three months,” Oketch said.

The Ipoa official added: “After we are done with investigations we have to present our recommendations to the office of the DPP and the case might also delay for a month or so depending on the queue at his desk.”

He stated that regardless of how long it will take, justice will be served.

The officer who killed Maina is alleged to have followed him to an alley after shooting him in his left ankle. Witnesses said that he cornered Maina between two stalls and shot him in the stomach, chest and face as the victim pleaded for his life.

Maina had come home for the Christmas holiday.

Late December last year, Ipoa said it will recommend criminal or disciplinary proceedings against any officers proven to have shot the university student.

Student Organization of Nairobi University chairman Anthony Manyara urged Ipoa to hasten the case for justice to be served.