Officials say the operation will continue until at least 5,000 illegal firearms are retrieved

• The team said they conducted intensive patrols within Kargi division on Sunday and recovered three Mark 4 rifles, surrendered by elders to the chief.

• "We need to recover more guns. We will review this operation when we have around 3,000 guns. We believe there are still many more guns in wrong hands," Matiang’i said. 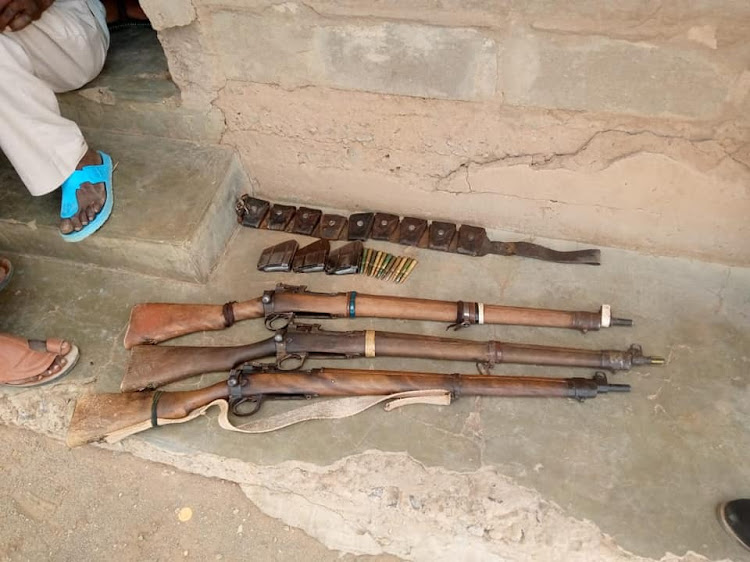 DISARMAMENT: The rifles that were surrendered in Marsabit on Sunday, June 19.
Image: NPS

Security teams in Marsabit have recovered three more guns in the ongoing operation aimed at restoring peace in the region.

The team said they conducted intensive patrols within Kargi division on Sunday and recovered three Mark 4 rifles, surrendered by elders to the chief.

Police spokesman Bruno Shioso said the two-month long exercise has been progressing well and there is reduced crime so far.

“We are happy so far, as the operation is achieving its targets and we hope for the best at the end,” he said.

There is an ongoing operation to mop-up illegal guns in Marsabit county.

Officials said the operation will continue until at least 5,000 illegal firearms are retrieved.

A fortnight ago, Interior Cabinet Secretary Fred Matiang’i said although the multi-agency team deployed last month had restored peace in the vast county, the mopping of illegal weapons must be concluded as a long-term security strategy.

He said more than 200 guns, 3,000 ammunitions, a grenade and assorted bayonets have been recovered under Operation Rejesha Amani Marsabit.

"We need to recover more guns. We will review this operation when we have around 3,000 guns. We believe there are still many more guns in wrong hands," Matiang’i said.

The CS further said the curfew, which was extended by 30 days early this month, will be in place until after the August 9 General Election.

The extension is intended to facilitate the operation to stabilise a county that has been a theatre of brutal conflicts, claiming hundreds of lives over the years.

The operation is being undertaken by a multi-agency team of officers from the General Service Unit, Anti Stock Theft Unit and Rapid Deployment Unit.

The CS hailed the deployment of the security team saying it has succeeded in stopping ethnic conflicts that have ravaged the county.

“Since the deployment of this team, we’ve not had a single insecurity incident in Marsabit. We are very proud of the team for what it has achieved so far. Life has gone back to normal and Marsabit residents are now able to go on with their business,” he said.

Three killed in Marsabit, Isiolo amid operation on illegal guns

Residents found body hours after he had been killed by gunmen, who stole an unknown number of animals
Counties
1 week ago

In Operation Rejesha Amani Marsabit the team received five rifles, which were surrendered to the local officials.
News
5 days ago

Some support curfew extension, while others say it is not necessary
News - Page 8
2 weeks ago
“WATCH: The latest videos from the Star”
by CYRUS OMBATI Chief Crime Reporter
Eastern
22 June 2022 - 22:00