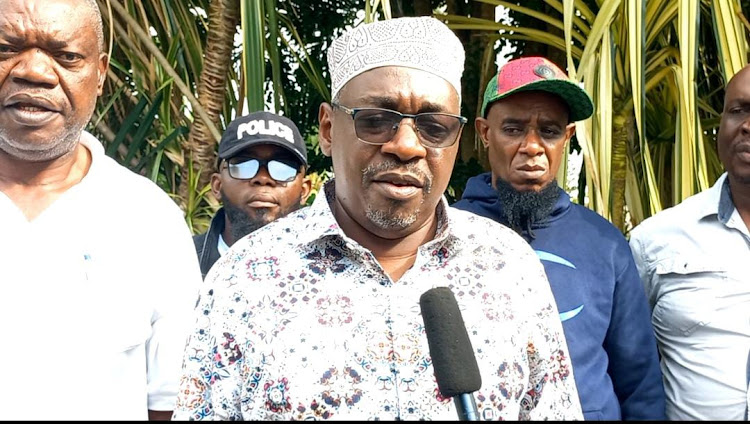 The ODM team said the county workers have now become chief agents of Achani and have been spotted on several occasions campaigning for her.

Mvurya, who is counting days to leave office after serving two terms, is rooting for Achani to succeed him as the next governor.

However, his decision has been met with a lot of resistance from some of the candidates vying for the county top seat, who have asked him to be neutral and let Achani fight her own battle.

At least six candidates were cleared by Independent Electoral and Boundaries Commission to vie for the Kwale gubernatorial position.

Achani will be facing five men in a predicted hot race that Kwale has ever witnessed.

However, as the campaign enters homestretch, Boga and Kwale ODM fraternity are crying foul that both Achani and Mvurya are using public servants and resources to campaign contrary to the law.

"Mvurya has made civil servants campaign agents of Achani. They are going round seeking votes," he said.

He said the county administrators should know that their mandate is to serve the public, not Mvurya and Achani.

Boga further said their action is a violation of the constitution and should be punished in accordance with the law.

The ODM candidate called on the electoral agency to take action against Mvurya and his deputy for breaking the law.

Boga made the accusations on Monday in Ukunda when he held a press briefing.

But both the governor and his deputy have been denying the allegations since the start of the campaigns.

The ODM team further said some opponents are plotting to rig votes, expressing fears that the results might be altered.

Boga said they have got wind of the plot, warning the perpetrators not to dare.

“ODM is alert and we will protect our votes from being stolen,” he said.

Nyakiti said they will not allow ODM votes to be stolen and will protect them. He also asked IEBC to enhance vigilance to ensure the election is free from any form of malpractices.

However, Mvurya and Achani have on numerous occasions dismissed the accusations that county workers are being used in campaigns as baseless and mere propaganda.

The duo said their opponents have sensed defeat because they lack agenda and development to show to the electorate.

"They have nothing to offer, but to sell lies and misconception that women cannot lead," Achani said.

Mvurya advised the opponents to shun divisive politics if they have no agendas.

"Stop inciting people with clueless propaganda and do not divide the electorate along tribal, gender and religious lines," he said.

He says Ruto will bag at least 70 per cent of the two million votes of the region.
Counties
1 month ago

Professor Hamadi Boga and Daniel Dena were the only candidates who turned up for the event.
Counties
2 months ago