He was counselled that political sycophancy is a threat to democracy

• Mombasa businessman-cum-politician, who wants to run for Mombasa gubernatorial seat for the third time in 2022, is of the view that Murathe is Uhuru's Mr Fix it.

• According to the Biwott gospel, a president needs five men -  among them one to control Parliament and another with the capacity to knock out the teeth of anyone who opposes the president. 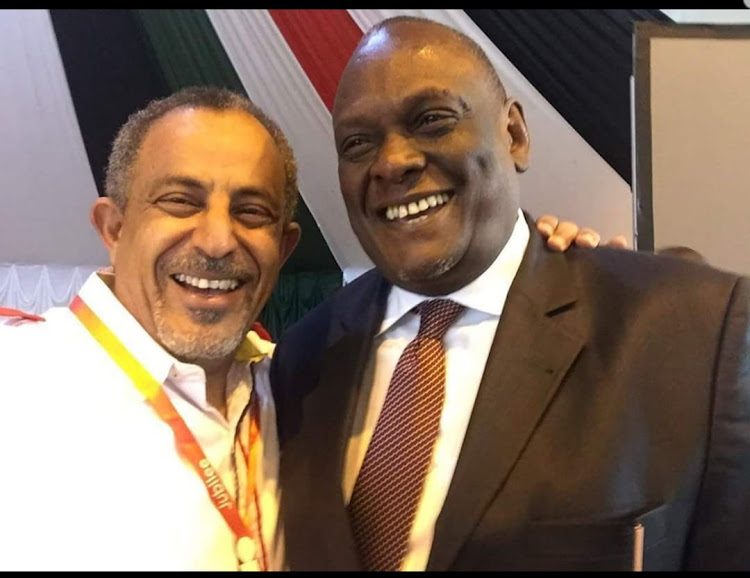 Shahbal, who wants to run for Mombasa gubernatorial seat for the third time in 2022, on Tuesday equated Murathe with Nyato era powerful minister Nicholas Biwott.

In his social media post praising the former Gatanga MP as  “President Kenyatta’s Mr Fix it”, he said Biwott once told him that a president needs five men - the first one controls Parliament, the second runs the machinery of government and the third brings large amounts of money as and when required.

The fourth man is the one who can mobilise thousands of people into the streets at short notice while the fifth is the one with the capacity to knock out the teeth of anyone who opposes the president.

“Today, President Uhuru Kenyatta has his five men. The Total Man is one David Murathe,” said Shahbal, in a Facebook post that attracted over 1,800 reactions, 917 comments and 114 shares.

However, the post did not go down well with netizens.

Anunda Nyarango told the prospective governor: “You have no bearing, you don’t’ even know what you want. You are a political weakling who thinks posing photos with Raila and Murathe will catapult (you) overnight (to) national leadership. Find your roots first.”

Ali Abdhalla dismissively told him:  “Political sycophancy is a threat to democracy” while Tawfiq Said questioned how someone of the politician’s stature would be celebrating people who knock out other people’s teeth.

“Seriously, is this coming from you? Celebrating people who knock out other people’s teeth? Big brother Shahbal, with all due respect, you need a thorough soul searching.”

Kibisu Beutttah Charles posted: “I respected and admire your post and arguments, but of late you’ve become a puppet. Your reasoning is horrible, your examples are people who brought a lot of anguish in families. Where did your ethics get lost Hon. Suleiman Shahbal?”

Some Mombasa residents who spoke to the Star said the politician's post exposed his true self and what he stands for.

“By glorifying the vices of corruption and rights abuse without passing judgment, he (Shahbal) exposed himself as a self-seeker who will stop at nothing to achieve his aims. The politician exposed his true self,” a resident said.

In January 2016, Shahbal came under scathing attack for claiming that Jubilee will win the 2017 elections by force - even if it means buying or stealing votes.

"This time round, I am telling you, we will win the 2017 election by force. We will steal, we will buy... whatever it will be [sic]," he told a Jubilee rally in Kilifi.