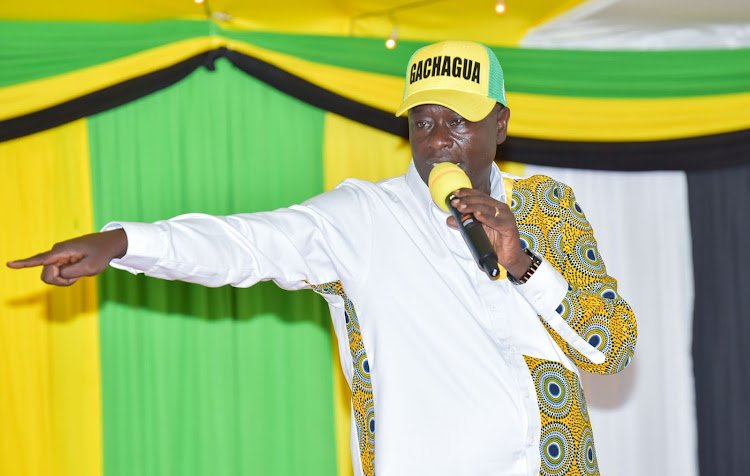 Deputy President William Ruto will clinch the presidency with not less than 12 million votes in next week’s election, his running mate Rigathi Gachagua has said.

The UDA presidential running mate said 60 per cent of the 12 million total votes cast will come from the vote-rich Mt Kenya region.

Gachagua said the figure was arrived at after their alliance mapped out the political topography of the country.

Speaking on Monday, the outgoing Mathira MP dismissed the presidential opinion polls that have been undertaken recently and which indicate Raila Odinga is in the lead.

He said the surveys do not reflect the will of the people as they are financially sponsored by their opponents.

“We are not swayed by those surveys because they are linked to one of our competitors. We equally call on our people to dismiss them with the contempt they deserve because their predictions always fail the litmus test,” Gachagua said.

The Mathira legislator said the number of delivered votes under a Kenya Kwanza Alliance government will largely determine the division and allocation of state positions among regions.

Speaking on a Gukena FM night show interview, he said Ruto's government will be characterised by hard work, diligence and unity of purpose to restore and empower the lowly who, he said, have since been abandoned by the current regime.

Guided by their citizen-centric manifesto, Gachagua said their administration will streamline and professionalise the public sectors to restore public confidence on efficient service delivery.

He also said if elected, their goal would be to restore dignity which has since been stripped by the current regime and which, he said, has led to large-scale misfortunes for Kenyans.

Gachagua cited the numerous demolitions that have been undertaken by the state without prior notices, a situation that has not only contributed to emotional breakdown, but also fuelled economic and unemployment crisis.

“It is unfortunate that Kenyans cannot run their businesses effectively for the fear of being kicked out and their business premises destroyed," he said.

"This kind of practice is uncalled for and outrightly malicious and will not have a place in a Kenya Kwanza coalition government.”

Gachagua said Ruto's presidency will prioritise treating Kenyans in a humane way by issuing a grace period notice of three years prior to removing individuals living on state properties.

He said their manifesto is well thought out and has the solutions to help the country.

The UDA presidential candidate said the proposals are informed by the numerous public participation they have since undertaken in various parts of the country.

He said a think tank of accomplished economists and experts in diverse fields have come in handy in crafting their marshal plan for the revival of the country’s economy.

“We have the Sh50 billion Hustler Fund which will be loaned at an affordable minimal interest rate and which will go a long way in empowering the ordinary wananchi," Gachagua said.

"We will lower the cost of basic commodities and ensure that the medical scheme is affordable to all citizens.”

Moreover, he said their government will create an enabling environment for business and agricultural-related practices through formulation of robust policies, as well as provision of subsidised farm inputs.

Gachagua said Ruto's presidency will dismantle cartels who have since held hostage the tea and coffee sectors.

He cited the Mombasa tea auction as a notorious spot where cartels have infiltrated and deprived farmers of the power to take control of their produce.

The UDA presidential candidate said their government will break the exploitive sale chain and lobby for a direct sales of farmers' produce.

Gachagua further said state envoys who intend to serve in their government should be ready to roll up their sleeves as it will be no mean task.

“Those who will be dispatched as ambassadors to various nations will be required to be hard workers. Constant partying and misuse of government resources in attending dinners and cocktails will be a thing of the past,” he said.

"We expect our future ambassadors to negotiate life transformative deals for our people as they search for foreign markets for our agricultural produce. Agriculture is the backbone of our economy and as such Kenyans should benefit from it.”

Should Gachagua record a statement with the DCI over death threats?

Should Gachagua record a statement with the DCI over death threats?
Poll of the day
2 weeks ago

Gachagua: How strange people tried to access my room in Nakuru