Some of them include Woman Representative Ngirici, outgoing Senator Kibiru and former governor Ndathi 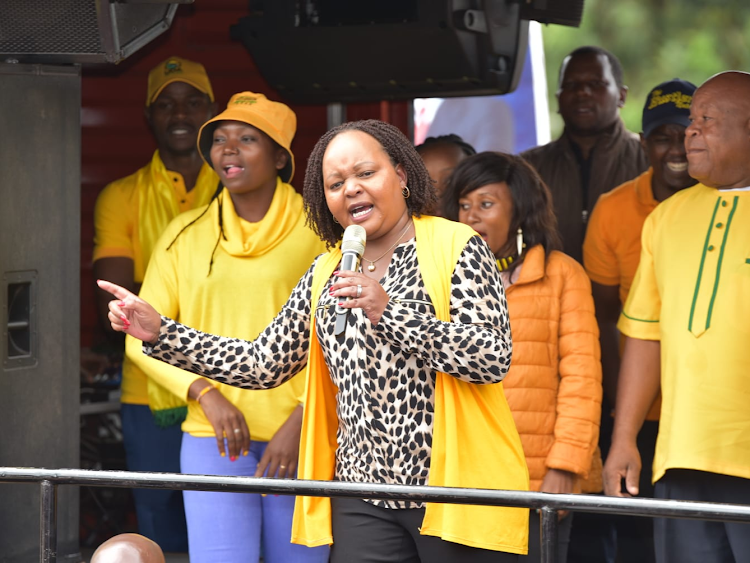 They say, "All is well that ends well," so is the hope held by all the eight candidates who have thrown their hats into the ring in the Kirinyaga governor race.

As the campaign season hits homestretch, each of the candidates is putting their best foot forward with the hope that it help them convince the 376,137 voters why they are the best bet for the job.

The finalists who have since been cleared by the Independent Electoral and Boundaries Commission are a composition of big guns in the political realm, illustrious business people and financial experts.

Among them are two women and six men who are now left at the mercy of the 376,137 voters who will now be accorded a daunting task of electing the best of them all.

Waiguru has been at the helm of the Kirinyaga county administration over the past five years. The UDA candidate is banking on her scorecard in her reelection bid.

Under her slogan 'wira warie' (let the work speak for itself), Waiguru takes credit in projects like the ‘Wezesha Kirinyaga’, an ambitious economic stimulus programme that empowers residents through value  chain agricultural projects.

Some of the projects include poultry, bee keeping, pig rearing, acquaculture, dairy farming and avocado farming, among others. The programme has supported more than 50,000 households in the county.

In a bid to attain Universal Health Coverage, her administration has undertaken major infrastructural reforms that include construction of the ultra-modern facility that will enable provision of specialised health services once complete.

Under Waiguru's leadership, the county is also upgrading Kimbimbi and Kianyaga hospitals from level 3 to level 4 . Her administration is equally overseeing the completion and equipping of 19 dispensaries scattered across all wards.

The trained economist who picked former county assembly speaker David Githanda as her running mate describes herself as a pragmatic, diligent leader who upholds excellent performance at all times.

Under her slogan ‘smairo ni tiki’(loosely translated to smile is tick), Ngirici pledges to restore the smiles on the Kirinyaga people through the implementation of various projects.

Her manifesto is anchored on 12 thematic areas which include agriculture, health, education, trade and industrialisation, roads and infrastructure, among others.

"My administration will ensure prudent allocation of county funds and resources and ensure value for money for every project implemented. There will be no wastage of resources in my government," reads a part of her manifesto booklet.

Since Kirinyaga is an agricultural county, Ngirici hopes her administration will formulate policies that will ensure farmers tap into agribusiness for the full realisation of their potential.

Her administration further intends to establish a sustainable market for the produce grown in the county.

On health, Ngirici says she will ensure a timely procurement of pharmaceutical and non- pharmaceuticals in order to ensure residents get efficient service delivery.

Moreover, she pledges to deploy health professionals and reinstate all sacked medics who participated in the 2019 strike.

Ngirici describes herself as the only visible and approachable county leader who seeks to unseat Governor Waiguru on an independent ticket. She has picked former Kenya Revenue Authority commissioner Eliud Wanjao as her running mate.

After months of soul searching and intense consultation, the outgoing senator says he finally made the decision to go for the top seat.

His sterling performance as the as the finance and budget committee chairperson did not subject him to a comfort zone but instead gave him the challenge to seek a higher calling.

With his eyes set on being the third Kirinyaga governor, Kibiru says he intends to roll out a citizen-centric administration.

As he puts it, his government intends to widen public participation space and get rid of bureaucratic leadership style to give priority to wananchi on the kind of devolved projects his administration should initiate.

He says this will enable the people to see the value for their money as they have the sovereignty to decide what their government should do for them.

“Our manifesto is guided by the people’s needs because our mission is to use the infrastructures available and those designed by the government to help put money into our people’s pockets,” Kabiru says.

The senator further says his primary health care goal is to ensure that health service delivery is top notch.

Besides assuring farmers a guaranteed minimum returns for their produce, the Kibiru – Peter Ndambiri administration pledges to equip farmers so that they can practice smart farming and subsequently get value for their sweat.

He says his administration will also create an enabling environment that will attract investors thus creating jobs for residents.

“We will provide extension services and officers who will equip our people on how to tap into the agri-business.We don’t want them to just practice subsistence farming , we want them to strike gold in farming because it is a lucrative investment.”

He also pledged to tighten the noose on the public coffers so as to avoid wanton wastage of public funds which would otherwise be used in developing the county.

Kibiru will battle it out on a Jubilee Party ticket and, should he clinch the position, he and his deputy Ndambiri will share out the ministerial portfolios on a 50-50 basis.

The former long serving administrator who says he took a five-year break from active politics reveals that he is back with a bang and as such his competitors should not undermine his candidacy.

He says he is back to streamline all the areas that have since taken a wrong turn since he left the Kutus-based offices.

As the first governor, Ndathi is credited for having laid the foundation and implementing devolved roles in the county.

He pledges to revive all the projects that were captured in his county integrated development plan(CIDP) which might have stalled and which never saw the light of day under the current regime.

“As we look into finishing the projects that suffered negligence, my administration will have in place another CIDP that will  guide us in implementing our health, agriculture, human resource and manufacturing agendas,” Ndathi says.

He lauded the achievements of his first term, saying it played a critical role in shaping many of the projects in the county.

“We laid out the plans  and implemented many of the projects  with a limited annual budget of Sh.3 billion. Moving into the future, I believe we can do much as our annual allocation has surpassed the Sh5 billion mark,” the former governor says.

“Rather than having a separate KMTC, we had an ambitious proposal of integrating a medical school within an expanded level 6 medical facility. This plan was on its way to completion since we had finalised the paperwork and entered into a partnership with Kirinyaga university.

“If the current regime actualised this plan, we would have a distinct one-stop shop medical hub within the region where we offer training to medical students, as well as offer health services.”

Ndathi also promised to establish a level 4 health facility within Kutus and elevate the status of Thiba dispensary.

The former county chief further says he will establish processing factories in each constituency that would enable residents to have their perishable agricultural produce undergo value addition.

He further pledged that his administration would improve the working welfare of the county staff by making timely salary payment and offer intrinsic and extrinsic motivation.

Ndathi, who is vying under The Service Party, has picked Judy Wathati Kinyua as his running mate.

Gitau, who is vying on a Safina ticket, anchors his manifesto on 15 sectors which he intends to transform. They include roads, water, health, education and land, among others.

In the provision of efficient prompt health services, the former lawmaker proposes to introduce a project dubbed ‘Afya bora mashinani’ which will seeks to assemble a boda boda health team.

The project will be tasked with delivering pharmaceuticals and non –pharmaceutical products in health facilities round the clock.

In the education sector, he pledges to lobby for an additional university, purchase more land or the expansion of more institutions and improve the ECDE school feeding programme and its infrastructure.

On agriculture, Gitau says his administration will be hands-on in establishing a processing factory for agricultural produce and a fertiliser plant.

If elected, the he will serve alongside his running mate Esther Njoki.

Ndau, who is vying for the first time, describes himself as a go-getter.

The Kadu-Asili candidate pledges to place a priority in the establishment and promotion of cottage industries, improvement of Jua Kali, digital innovations and art and creative industry, which he says will be key in creating jobs.

In a bid to empower the residents, Ndau says his administration will also provide youths with non-refundable funds, offer loans with zero interest rates and formulate friendly policies to businesses.

The ANC candidate describes himself as an ambitious, untainted, budding leader whose political career is on a meteoric rise.

As a coordinator who has served financial institutions in Small Medium Enterprises, Ireri believes in the power of leadership to transform communities hence his decision to join the governorship race.

The financial management expert says leadership has been misconstrued and converted into a position to pursue self-gratification, power and ill-gotten wealth.

He believes Kirinyaga county is a land of plenty that has sufficient resources that could enrich residents and spur economic growth.

As a result, he believes he is the best bet to solve problems bedevilling the county.

“I will offer fresh leadership which tends to gravitate towards demystifying the operations of the government. My administration will be more public-oriented as I want the people to feel the presence of the government. This format has worked for many countries and as such it can work for my county,” he said.

He further says he intends to streamline the ECDE, health and empower farmers to fully realise their potential.

Ireri says in his manifesto he has already identified ready external markets for horticultural produce.

He believes his vision will be implementable as he seeks to work hand in hand with his deputy Nelly Wakera Koigu.

Kagai's endorsement as the Narc Kenya governor candidate after the elevation of Martha Karua to national politics has reenergised his political career.

The economist says his administration will ruthlessly deal with corruption to improve and professionalise service delivery in the public sector.

He says his manifesto is realistic and was well thought out with the help of Karua who hails from the county.

“My victory will mark a new dawn in the lives and services delivery in Kirinyaga county. We endeavour to execute our manifesto with our highlight being undertaking a radical and robust transformation in the public sector,” he says.

Kagai says his administration intends to streamline health, ECDE and create a conducive business environment that will attract donors that intend to partner or invest in the county.

His administration further intends to improve on the working conditions of the staff and help in overseeing the capacity building of the county assembly members.

Ngirici was responding to Muturi’s remarks on Saturday.
News
1 month ago

Karua's support for Azimio against Kirinyaga residents will, says Waiguru

Says residents have not shifted their allegiance from UDA despite the appointment of Karua as Raila’s running mate.
Counties
3 weeks ago

Where are they? Bigwigs battle for their political lives

Exodus to defend their backyards has forced Raila, Ruto to find substitutes
Siasa
1 month ago
“WATCH: The latest videos from the Star”
by WANGECHI WANG'ONDU
Central
31 July 2022 - 22:00