Wang'uru court directs investigations to be finalised within ten days. 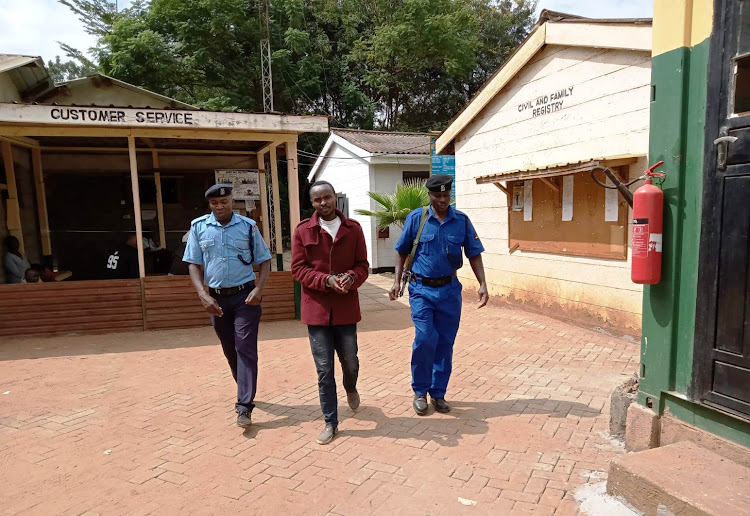 A Kirinyaga man accused of killing his friend and burying his remains in a shallow grave in his home in Mwea was Monday arraigned before a Wang’uru court.

John Mwangi, who is accused of murdering Stephen Murimi, 31, however did not take plea.

This is after the court granted the police their request to have the suspect remanded at the Wang’uru police station in order to complete their investigations.

The Mwea-based court, through chief magistrate Abdulkadir Lorot, directed the investigations to be finalised within a period of 10 days upon which the suspect will be arraigned back to take plea.

Police boss Daniel Kitavi told the Star by phone that Mwangi was arrested from his hideout in Nanyuki over the weekend and later transported to Mwea to answer to the murder allegations.

The suspect, who is in his early 30s, is alleged to have killed Murimi on an unknown date and later buried his remains in a shallow grave next to his house latrine.

It is believed the suspect's intention was to dump the body into the pit latrine, but since his body could not fit through the small opening, he resorted to digging a shallow tunnel that could lead the body towards the pit.

The body was discovered and retrieved last Thursday by the residents who later called for help from the authorities.

According to some of the neighbours who spoke to the Star late last week, the two are believed to have been living together in the suspect’s home.

" Prior to living together, I had spotted the frequent visitations by the deceased to the suspect's house," one of the female neighbours said.

"I don't know what happened between the two but I suspect there was an altercation between them which led to the suspect murdering  his friend."

An uncle to the deceased said their relative was lured to his death by the suspect who wanted them to start a business together.

“He went visiting his friend on a Saturday before he met his untimely death because the suspect had told him that he wanted them to start a business together," the uncle said.

"However, my nephew went silent and could not be reached by phone, and that’s when we got curious and went looking for him at the suspect’s house.”

After hours of search, which included breaking into the suspect's house, they discovered a fresh grave next to the latrine, and out of curiosity,  scooped the soil only to find Mwangi's body buried there.

Another neighbour said the suspect is a local mason who had previously separated with his two wives whom he married on separate occasions.

The man is said to have sired two children in the first marriage and one in the second.

Besides, Mwangi is said to have been a staunch Christian before going astray.

Another neighbour expressed his shock over the incident, saying Mwangi was the least person she expected to commit such an act.

"Mwangi was an upright man and was so committed to church-related activities before he started becoming an absentee. We are shocked that he could act in such a bizarre manner," the neighbour said.

The body of the man was first to be discovered by the lodge's workers.
Counties
1 month ago

Mutunga was re-arrested after he was released on bond a few days after his initial arrest.
News
1 year ago

Man accused of family's murder to take plea in January

Murage is accused of killing his wife and four children aged between one and 13 with an axe.
Counties
6 months ago
by WANGECHI WANG'ONDU
Central
21 June 2022 - 22:00