Waiguru said she won't give in to the intimidations as she is certain of the people's support.

• The county chief said she would in this campaign season engage in clean politics devoid of insults and character mudslinging. 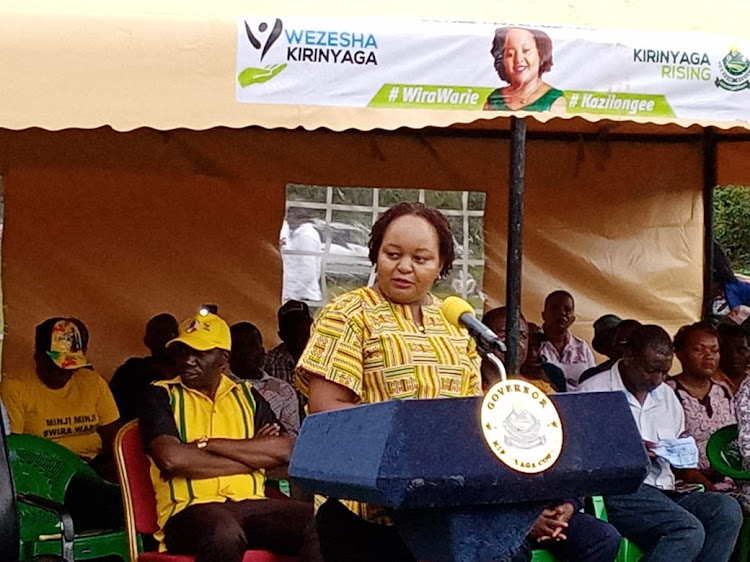 She accused her opponents of orchestrating and committing the offences to intimidate UDA party candidates.

Speaking on Thursday in Gichugu, the county chief said they will not give in to the intimidations as they are certain of the people's support.

"They have been destroying our billboards during the night hours with the hope that the people will change their stance. This is far from the truth. The people have already made up their minds and are solidly behind us, as well as squarely locked in the UDA party," she said.

On Wednesday, through her social media platform, Waiguru threatened to lodge a complaint before the IEBC seeking to bar one of her unnamed opponents from contesting in the August polls for allegedly destroying and defacing her campaign materials.

"I will today be lodging an official complaint to the IEBC through my lawyers seeking to bar my opponent from running for electoral office for defacing and destroying my campaign and promotional material, contrary to section 13(L) of the Elections Offenses Act No 37 of 2016 and Elections Code of Conduct," read a part of the statement.

While tagging the IEBC and DCI social media platforms, Waiguru attached photos of her destroyed billboards and the number plate of a vehicle alleged to be ferrying the people vandalizing the billboards.

The county chief said she would in this campaign season engage in clean politics devoid of insults and character mud-sling.

She said she is focused on a more important task of explaining to the electorate what her administration has achieved and what it intends to achieve in the next term should she be re-elected.

The remarks are perceived to have been directed to interior principal secretary Karanja Kibicho who for a considerable period she has not been seeing eye to eye.

"I will not bother responding to those going round the county insulting me. Instead, I will pray for them as well as wish them well because their time to harass us is almost up."

In addition, she pledged that should UDA take over the reins of power, she would negotiate for a principal secretary post to be handed to a person who hails from Gichugu.

She said Kirinyaga had capable individuals to serve in the national government.

"I will forward the proposal to Ruto to appoint a PS from Gichugu to serve his administration. This will help us a great deal because we shall be able to join hands to help our people unlike another one who has been belittling us," she said.

Waiguru said the appointment will help strike gender and more so regional balance.
News
1 month ago

UDA revises campaign strategy in Mt Kenya ahead of polls

The party is extensively recruiting members to adopt new strategy.
News
1 month ago
WATCH: The latest videos from the Star
by WANGECHI WANG'ONDU
Central
26 May 2022 - 19:42