Up your campaign game, parties won't save you — Jamleck

•Murang’a has been a strong support base of former President Mwai Kibaki’s administration and the Jubilee government.

•This meant that party nominations were a do-or-die for aspirants as they determined who would be elected during elections. 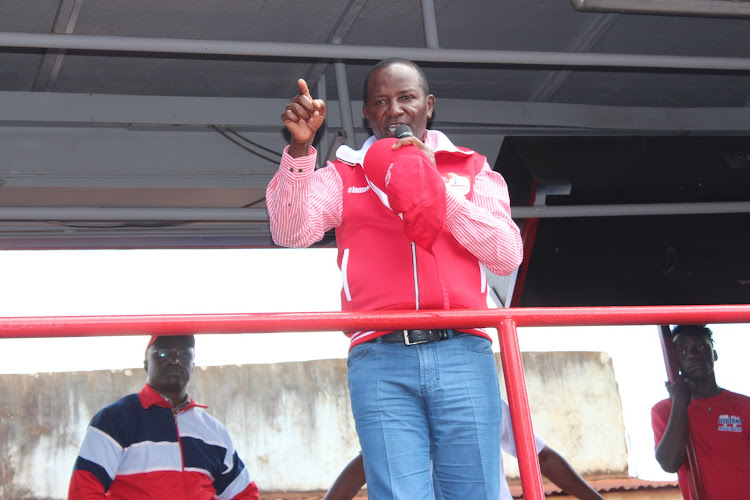 Murang’a governor aspirant Jamleck Kamau has said aspirants hoping to ride on their parties to be elected will be disappointed.

Kamau said parties will not save aspirants and that they will have to up their campaign game and seek votes.

In a jibe that seemed to be directed at his rival Irungu Kang’ata, Kamau said Murang’a people will elect leaders who can positively change their lives without paying attention to their parties.

Kang’ata, who is vying through the UDA party, has been calling on residents to vote in aspirants who are in his party for all the elective seats.

Murang’a has been a strong support base of former President Mwai Kibaki’s administration and the Jubilee government. It has a history of voting in leaders based on their parties.

This meant that party nominations were a do-or-die for aspirants as they determined who would be elected during elections.

In 2013 and 2017, all seven MPs and Governor Mwangi wa Iria were voted in through Jubilee.

However, after the last elections, residents shifted their support from the Jubilee government.

Kamau said the previous elections were a testament that residents should not blindly vote for leaders because they are in a particular party and should consider their records and agenda.

“Many people are disappointed in the leaders they voted for in 2017 and will not make the same mistake,” he said.

Kamau said it is the individual leader that affects people directly. 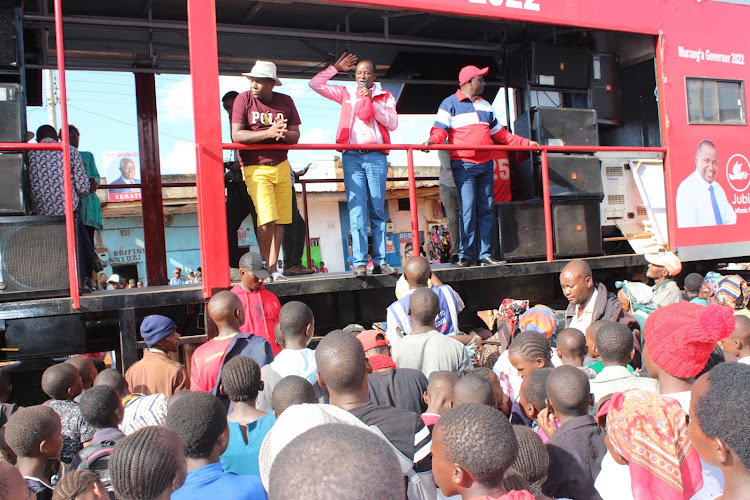 UP YOUR GAME: Murang'a governor aspirant Jamleck Kamau at Ngurwe-ini in Kigumo subcounty on May 8.
Image: ALICE WAITHERA

He said he is not afraid to campaign through the Jubilee party but expressed confidence that residents will vote for him based on his agenda.

“Those thinking that they will hide behind parties should know that it will not work,” he said.

Speaking while holding rallies in different parts of Kigumo and Kandara subcounties on Sunday, Kamau said the county requires a leader who will change its fortunes and streamline service delivery.

If elected, he pledged to ensure all hospitals are well equipped to ensure residents access quality health care.

His administration will ensure tenders are issued only to residents for the money to circulate in the local economy.

“I know they have banded together against me but I will face off with them and I know I will solve all the challenges facing Murang’a people and the county will set the pace for others,” he said.

Kagone said she will ensure the interests of youth and women are well catered for.

She urged women to fearlessly fight for political positions in both the national and county governments saying their leadership has been tried and tested.

“Women have proven they are capable of holding leadership positions and performing exemplarily well,” Kagone said.

Kamau, Kang’ata and Nyakera have all picked women as their running mates while the rest are yet to announce their choices.

Some have accused the party of unfairness while others have hailed the consensus process.
Counties
4 weeks ago

Women want Murang'a governor aspirants to pick them as deputies

Say as caretakers of their homes, they have proven beyond doubt they can keep families together
Counties
1 month ago
“WATCH: The latest videos from the Star”
by ALICE WAITHERA Correspondent, Murang'a
Central
09 May 2022 - 22:00